In recent years we have repeatedly heard Indonesian government officials (as well as analysts) emphasize on the importance of tapping the potential of non-traditional export markets in an effort to improve Indonesia’s export performance (and trade balance).

The problem is that, currently, around 70 percent of Indonesia’s total non-oil and gas exports are shipped to ten overseas markets, with China and the United States – together – accounting for almost 35 percent of the total. It means that in terms of trade Indonesia is quite dependent on a few countries only.

Indeed, having a more diverse (and even) array of export markets should make the export performance of Indonesia (and therefore Indonesia’s overall economy) more stable. For example, it is estimated that for each one percent decline in China’s gross domestic product (GDP) growth, Indonesia's economic growth drops by 0.3 percent. This is partly due to China’s dominant position as Indonesia’s largest trading partner (moreover, Indonesian exports to China are dominated by primary products such as coal, wood pulp, and ores, slag and ash that are characterized by price volatility on global markets). So, if the economy of China comes under pressure, then Indonesia is bound to feel a significant impact. And while it is certainly true that giant export markets such as China, the United States and Japan cannot be replaced, adding new markets would make Indonesia’s overall export performance more stable.

One of the potential growth centers for Indonesian exports could be Bangladesh, a South Asian country (hence not too far away) that is home to around 165 million people. Moreover, on the website of the World Bank, which puts Bangladesh in the category of developing economies (or emerging lower-middle income economies), we can read that Bangladesh has an impressive track record of growth and poverty reduction, being among the fastest-growing economies in the world throughout the 2010s, supported by its demographic dividend, strong ready-made garment exports, and stable macroeconomic conditions.

In many respects Indonesia’s socio-economic conditions seem to resemble those of Bangladesh (although Indonesia is certainly further in its development process) and that might explain why both countries face the same challenges: poverty eradication, employment creation, laying down a competitive business environment, fostering increased human capital and skilled labor force, deepening of the financial sector, building efficient infrastructure, laying down a policy environment that attracts the inflow of private investment, and the strengthening of public institutions.

Meanwhile, the World Bank also advises Bangladesh to diversify its exports beyond the ready-made garment (RMG) sector as the country’s export performance remains too dependent on RMGs (RMGs are mass-produced finished textile products in the clothing industry). Bangladesh is among the world’s largest garment exporters, with the RMG sector accounting for around 84 percent of the country’s total exports.

US management consulting firm McKinsey and Company mentions that expansion of Bangladesh’s garment sector comes on the back of modernization over the past decade and improvements made in conditions for the country’s approximately four million garment workers.

This is the introduction of the article. Read the full article in our March 2022 report. Order the report by sending an email to info@indonesia-investments.com or a message to +62.882.9875.1125 (including WhatsApp). 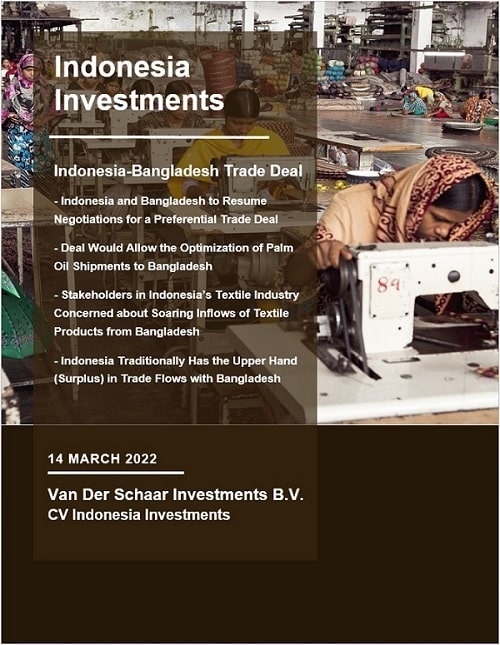