The level of 50.0 separates contraction from expansion in manufacturing activity. The headline PMI provides a snapshot of the manufacturing performance in the country and derives its data from questions on output, new orders, employment, inventories and delivery times. The survey is compiled by IHS Markit which has its global headquarters in London (United Kingdom).

The latest data indicate that demand conditions weakened at the start of 2019. While overseas demand remained weak (with export orders falling for the 14th consecutive month), it was in fact significantly declining domestic orders that pushed manufacturing activity into contraction. As a consequence, output volumes remained largely unchanged and backlogs continued to fall, underlining the surplus of operating capacity in the manufacturing sector of Southeast Asia’s largest economy.

Indonesia's Manufacturing PMI over the Past 12 Months: 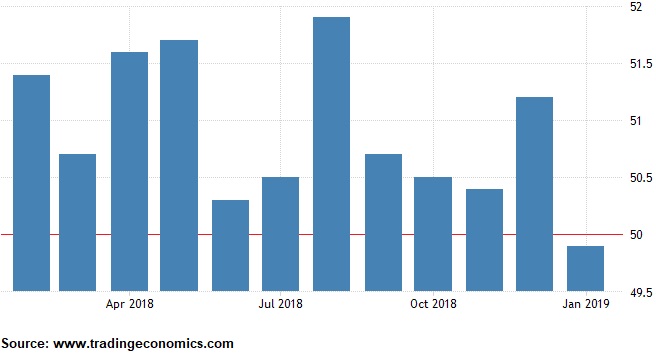 Read the full article in the January 2019 edition of our monthly research report. This report is scheduled to be released in early February 2019. You can purchase the report by sending an email to info@indonesia-investments.com or a WhatsApp message to the following number: +62(0)8788.410.6944