Qatar-based global communications company Ooredoo QPSC and Hong Kong-based multinational conglomerate CK Hutchison Holdings Limited signed an agreement to merge their Indonesian businesses: Indosat Ooredoo (which is publicly listed on the Indonesia Stock Exchange or IDX under ticker code ISAT) and Hutchison 3 Indonesia (known for its brand Tri); a deal that is valued at USD $6 billion.

This deal is certainly no small affair as Indosat Ooredoo is one of Indonesia’s largest telecommunication networks providers, while Hutchison 3 Indonesia is one of the country’s leading cellular telecommunications services providers. If approved, then the new entity, named Indosat Ooredoo Hutchison (which continues to be listed on the IDX), is set to become the country’s second-biggest telecommunications network provider –with estimated annual sales of around USD $3 billion– after market leader Telekomunikasi Indonesia, or Telkom).

Meanwhile, Ooredoo and Hutchison are both big global players. The Ooredoo Group has a total of around 120 million subscribers around the world (mainly in Indonesia, Algeria, Iraq, Kuwait, Palestine, Maldives, Myanmar, Oman, Qatar and Tunisia), while Hutchison has around 110 million subscribers across the globe (mainly in Indonesia, Australia, Denmark, Hong Kong, Ireland, Italy, Macau, Sri Lanka, Sweden, England, Vietnam and Austria).

The table below shows that Telkomsel (a subsidiary of state-controlled Telkom) is – by a clear distance – the market leader in Indonesia’s telecommunications service industry with almost 170 million mobile cellular subscribers. Indosat and Tri come on second and fourth place, with 60 million and 44 million subscribers, respectively. So even if they join forces, they remain far behind Telkomsel. Nonetheless with more capital and subscribers (through the merger) they’re in a better position to compete, especially in the new age of fifth generation (5G) cellular technology.

The full article is available in the September 2021 edition of our monthly report. This report can be ordered by sending an email to info@indonesia-investments.com or a message to +62.882.9875.1125 (including WhatsApp). 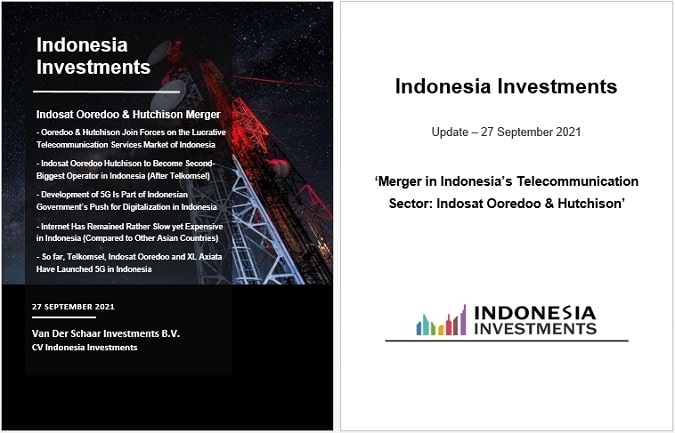