It was a remarkable first trading day of the year in Indonesia. Indonesia's benchmark Jakarta Composite Index showed a very volatile performance, starting in the red, then rising sharply to +1.32 percent around noon, and then falling to close 0.26 percent in the red zone at 6,339.24 points.

The Jakarta Composite Index had been touching new all-time record highs in the last week of 2017 and therefore analysts expected to see some profit taking at the start of the year. This was indeed true. Shortly after the opening of trading, the benchmark index fell 0.37 percent. Indonesia's contracting manufacturing activity in December (the data were released this morning) also put pressure on the index.

But then external positive sentiments kicked in. Asian stocks, generally, rose on the back of good Chinese manufacturing data as well as sliding geopolitical concerns as North Korean leader Kim Jong Un said he is open to talks with South Korea regarding the sending of a North Korean delegation to the Winter Olympics in PyeongChang (South Korea), scheduled for February 2018.

Foreign investors, on the other hand, bought more shares than they sold today. Foreigners recorded a 'net buy' of IDR 440.1 billion (approx. USD $32.6 million) on the Indonesia Stock Exchange. 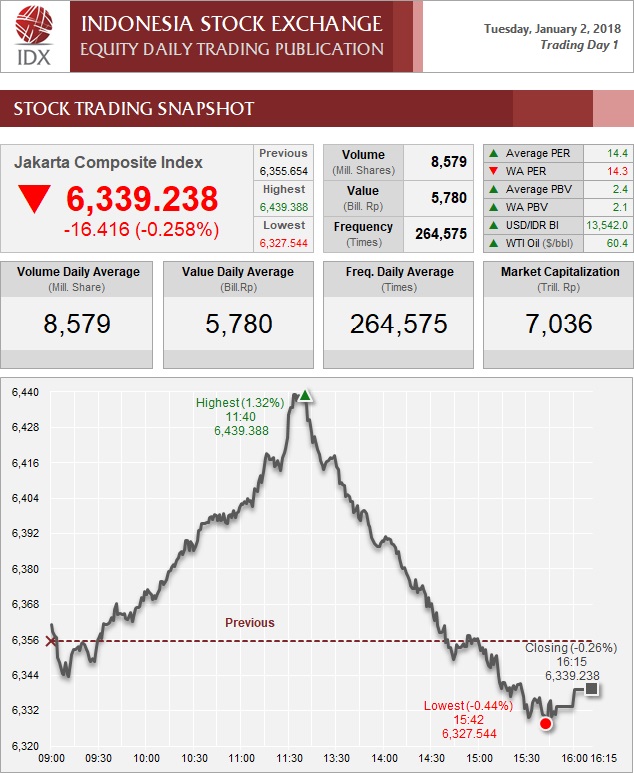 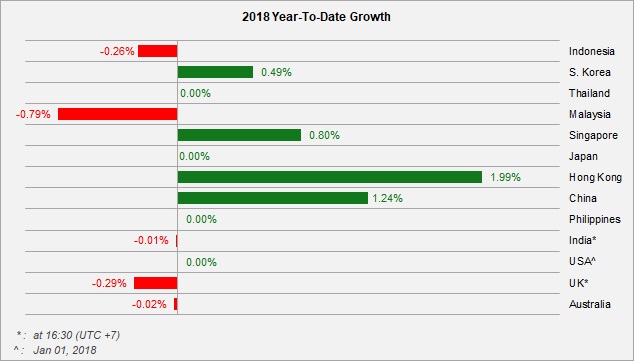 Meanwhile, the ailing US dollar weakened to its lowest position in more than three months on Tuesday (02/01). The Indonesian rupiah appreciated 0.30 percent to IDR 13,514 per US dollar (Bloomberg Dollar Index). The US dollar can be further plagued by Wednesday's release of the latest US Federal Reserve minutes covering the December policy meeting when when the Fed raised interest rates. Two policymakers voted against the hike as they doubt that US inflation will accelerate as hoped.