Adding more pressures onto the rupiah, Indonesia's Statistics Agency (BPS) announced on Wednesday (15/08) that the country's trade balance deteriorated significantly. In July 2018 Indonesia had a USD $2.03 billion trade deficit, much bigger than had been expected by analysts (and constituting the widest monthly trade deficit in the past five years). The latest deficit was particularly attributed to rapidly rising imports into Southeast Asia's largest economy.

Imports into Indonesia reached USD $18.27 billion in July 2018, up a whopping 31.56 percent compared to imports in the same month one year earlier. This is more than double the growth pace that had been anticipated by analysts. It is also worth noting that imports of consumer goods - although constituting only a very small portion of total imports (approx. 10 percent) - surged more than 60 percent year-on-year (y/y) in July 2018, indicating there is strong demand from the Indonesian market.

Meanwhile, the country's trade surplus in June 2018 was revised to USD $1.71 billion. In the first seven months of 2018 Indonesia has to cope with a USD $3.09 billion trade deficit. 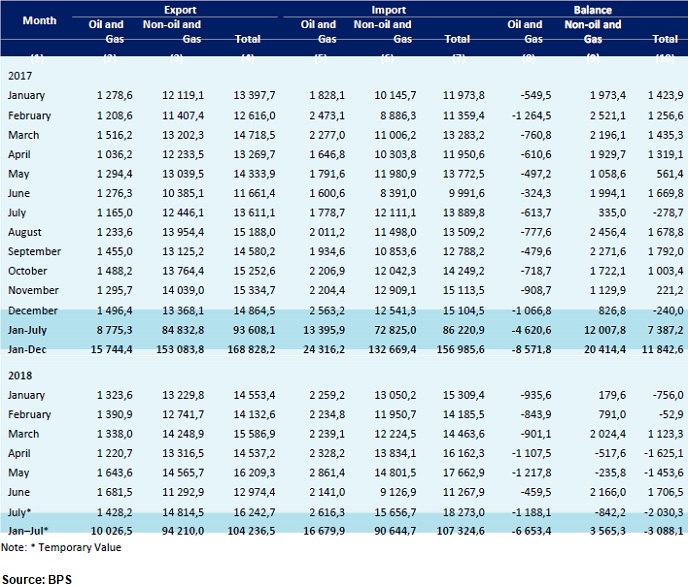 Trade Balance Indonesia Over the Past Five Years: