After the Mount Sinabung volcano (located in North Sumatra) has been erupting continously since September 2013 leading to 17 casualties and tens of thousands of evacuees, another Indonesian volcano - Mount Kelud (in East Java) - erupted around 22:50 West Indonesian Time on Thursday evening (13/02). Only hours prior to the eruption, the alert status of Mount Kelud was raised by the National Volcanology Agency. There have been six confirmed deaths. Volcanic ash and rocks have been thrown over a wide distance.

Mount Kelud is one of the most dangerous volcanoes in Indonesia, located on the country's most densely populated island of Java. About 200,000 people (in a 10-kilometres area around the volcano) have been asked to evacuate, while it has been reported that at least 21,000 people are living in the dangerous zone.

Volcanic ash is thrown over an area of 600 kilometres from the volcano, even reaching as far as Bogor in West Java. In Yogyakarta (Central Java), schools and universities are closed due to the thick volcanic ash. It is hoped that on Monday schools and universities open again. Moreover, several vegetable (and other) plantations are covered by thick ash. If rain will not come soon then it can lead to disrupted harvests of various vegetables. Reportedly, four airports (Husein Sastranegara Airport in Bandung, Juanda Airport in Surabaya, Adisumarmo Airport in Solo and Adisucipto Airport in Yogyakarta) are still closed due to the volcanic ash.

Being located on the Pacific Ring of Fire (an area with a lot of tectonic activity), Indonesia has to cope with the constant risk of volcanic eruptions, earthquakes, floods and tsunamis. Indonesia contains the most active volcanoes of all countries in the world. The Eurasian Plate, Pacific Plate and Indo-Australian Plate are three active tectonic plates that cause the subduction zones that form these volcanoes. Indonesia is estimated to have 129 volcanoes, all carefully observed by the Centre of Volcanology and Geological Hazard Mitigation (Pusat Vulkanologi dan Mitigasi Bencana Geologi), as a number of these volcanoes show continuous activity. On average, there is at least one significant volcano eruption in Indonesia per year. However, most of these eruptions do not lead to great damage or casualties because the majority of active Indonesian volcanoes are located in isolated regions. 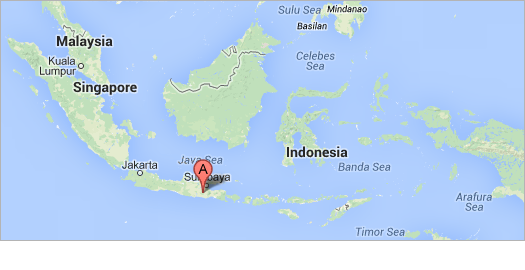