It is now about one month after the national Idul Fitri holiday when millions of city-dwellers travelled by air, road, rail and water back to their places of origin to spend a couple of days with their (extended) families. The positive news is that this huge movement of people did not lead to an increase in the number of COVID-19 cases in Indonesia.

And so, it certainly seems that the health threat has vanished, especially considering Indonesian hospitals have been empty for the past nine months or so (for example, the bed occupancy ratio, or BOR, in the province of West Java currently stands at 1.41 percent; in fact, a ridiculously low ratio). But does this mean that life (and the economy) will not be disrupted anymore by COVID-19?

Well, this is where we are a bit pessimistic. From the beginning, governments have fully committed themselves to vaccination programs for almost entire populations, using billions and billions of dollars (or the equivalent in other currency) to order COVID-19 vaccines. Global leaders and policymakers seem unwilling to announce the end of the pandemic unless the entire world has received COVID-19 vaccines.

The problem with this stance is that it has been confirmed in international studies that vaccine-induced protection (anti-bodies and T-cells) starts waning after around three months, and has gone after around six months after vaccination. That explains why many people who are fully vaccinated eventually become infected again (with or without symptoms), and therefore governments started their booster programs. But this is bound to become a never-ending cycle because well before all people on the planet are vaccinated (or had their latest booster jab), there are over a billion of others who effectively return to the ‘unvaccinated status’ as they had their booster shot more than six months ago. It simply becomes a permanent (logistical) crisis.

And we should also ask ourselves: is there still a health crisis today like there was in 2020 and the first half of 2021? If we take a look at Indonesia, we see that hospitals have been more-or-less empty after the Delta wave had spread across the country, signalling that Indonesia managed to achieve strong herd immunity starting from mid-July 2021 onward, when less than six percent of the Indonesian population had been fully vaccinated.

Even the highly contagious Omicron wave that peaked in mid-February 2022 caused no problems for Indonesia. Indeed, positive test results increased quite steeply, but Indonesian hospitals stayed empty. Meanwhile, compared to those countries where vaccination programs ran smoothly due to their smaller population sizes, we do not detect excessive death rates in Indonesia over that period.

However, rather unfortunately, we never hear Indonesian government officials or mainstream media discuss or address this topic. Instead, the focus on vaccination is maintained while all data and evidence that fail to support this narrative are simply ignored.

Considering the World Health Organization (WHO) continues to regard vaccines as the sole solution to “mitigate the public health and economic impact of the COVID-19 pandemic”, and considering it is quite likely that COVID-19 becomes a seasonal phenomenon (just like influenza) – implying that new waves are going to occur – the threat of being in a state of permanent crisis is there. The only positive matter is that it is not a health crisis the world will be facing, but a logistical one.

A glimmer of hope originates from China where restrictions were eased in Shanghai after two months of very harsh lockdowns. While various tight restrictions are kept in place, it does seem to be a sign that Chinese policymakers have become aware that a zero-COVID-19-tolerance approach is simply impossible to maintain. The opening of society in China will probably need to be executed in a gradual manner because any drastic changes would more-or-less be an acknowledgment by authorities that previous policies were a costly failure.

It’s also interesting to mention that we detected some support in the West for a more radical change in stance toward viruses. For example, this article in The Economist discusses the idea to treat the ordinary flu like COVID-19, instead of the other way round because influenza kills hundreds of thousands of people, each year. But, if we start treating flu like COVID-19 what would this mean? Seasonal social and business restrictions to prevent the spread of flu? Flu vaccination (booster) shots for (almost) entire populations? Travel restrictions if people fail to take a seasonal booster shot? It feels as if the world would be pulled into a permanent state of crisis.

While we do not know to what extent such articles and discourse are encouraged by the pharmaceutical industry, or, by certain radical streams in Western society (those who apparently do not accept death), we do see on social media platforms that there actually exists some support for such views in the West; views that may be imported into Indonesia.

Overall, May 2022 felt like a relatively quiet month for Indonesia. Perhaps, this was also related to the week-long national holiday at the beginning of May 2022. And yes, when Indonesian markets reopened on 9 May 2022, very heavy pressures emerged on Indonesian assets due to external factors (particularly monetary tightening in the USA). However, recovery kicked back in quite quickly.

Moreover, the highly controversial palm oil and cooking oil export ban was lifted by the Indonesian government on 23 May 2022 (after a three-week period). Indonesian President Joko Widodo responded to the removal of the ban stating that “supplies of bulk cooking oil had now reached a level greater than needed”.

However, in the field, bulk cooking oil prices are yet to recede to the targeted IDR 14,000 per liter level. If we take a look at the Trade Ministry’s online food monitoring system, then the price of bulk cooking oil was at IDR 16,500 per liter on 1 June 2022. On a positive note, this is an improvement from the level of IDR 17,300 per liter on 1 May 2022. President Widodo further added that “I believe in coming weeks prices [of cooking oils] will be more affordable".

After the palm oil export ban was lifted the Indonesian rupiah appreciated markedly in the following days. Obviously other forces are at play too but we do assume that rupiah weakness in the last week of April 2022 (with the ban being announced on 23 April 2022 before coming into effect on 28 April 2022) and rupiah weakness in the first three weeks of May 2022 was particularly influenced by this export ban.

In our opinion it will be particularly interesting to see what damages have been done to the May 2022 trade balance of Indonesia by the three-week export ban (the trade data are to be released by Badan Pusat Statistik in mid-June 2022) as palm oil is one of the biggest export items for Indonesia. Another concern is that overseas buyers will turn to Malaysian palm oil as deliveries from Indonesia become ‘too’ uncertain. Considering prices of bulk cooking oils on the Indonesian market are still not at the target level, who knows President Widodo will impose another palm oil export ban next month? It is a thought that might be in prospective buyers’ minds.

Another interesting news item in May 2022 was that the House of Representatives (or DPR) approved a cabinet request to raise the government’s energy subsidies and energy compensation payments by nearly USD $20 billion to keep subsidized energy prices unchanged in 2022, thereby trying to curb inflation. But, interestingly enough, no new debt is needed to fund these additional energy subsidies. Indonesian Finance Minister Sri Mulyani Indrawati stated in Indonesian media that government revenue is so much better than initially projected amid high global commodity prices and the world’s economic recovery from the COVID-19 crisis that additional energy subsidy spending can be funded through this windfall in revenue. This is a topic we discuss in more detail in this May 2022 report.

And with the central government absorbing part of inflationary pressures through additional energy spending, the central bank (Bank Indonesia) can stay well behind the curve in terms of raising its benchmark interest rate, thereby allowing economic activity to blossom. Contrary to our earlier projection – although additional energy spending had not been announced when we made the projection – Bank Indonesia kept its key interest rate at 3.50 percent at its May 2022 monetary policy meeting.

So, overall, Indonesia seems to be in a strong position at the moment. However, we do need to remind ourselves that energy subsidies are not a structural solution (it might simply be an expensive way to postpone an acceleration in inflation only). In fact, spending nearly USD $20 billion to allow cheap energy prices does also imply a range of missed opportunities (like we saw in the 2000s commodities boom when the government under the leadership of Susilo Bambang Yudhoyono refrained from imposing structural reforms despite the windfall in revenue). While on the one hand we are a bit milder on the Indonesian government’s decision to add USD $20 billion to keep certain energy prices low amid the very high degree of uncertainty in today’s world (and inflation is indeed a massive threat in the world today), we also want to remind that the windfall in revenue needs to be used productively to encourage the development of a national economy that enjoys strong fundamentals in times of low global commodity prices. To accomplish this, investment is needed in human capital, import-substitution industrialization, and value-added industrialization (that also manufactures goods that are exported to overseas destinations).

If there indeed will be a high commodity price cycle throughout the 2020s, Indonesia should really take advantage of the occasion. If it fails to seize the opportunity, then this decade may become known as the ‘decade of missed opportunities’ (similar to the 2000s).

This was the introduction of the May 2022 report. You can purchase the full report by contacting us through email (info@indonesia-investments.com) or WhatsApp (+62.882.9875.1125). 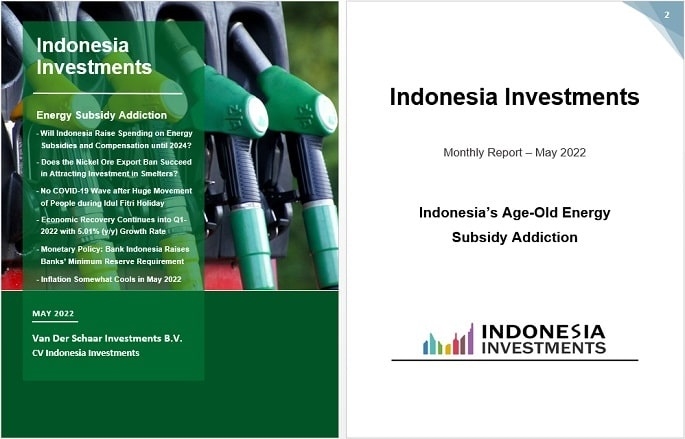