When we look at activity in the precious metals markets over the last decade, one of the biggest developing trends has been the increase in both demand and production output from emerging Asian economies. For most of this period, Indonesia has been participating with these trends - especially on the production output front. As recently as 2009, Indonesia was responsible for 130 tons worth of gold production, as mining activity becomes more efficient and increased investment resources flow into the country.

In the years following 2009, we have seen something of a decline in the average level of gold production in Indonesia. But recent developments suggest that production numbers could start to build as key companies look to add resource exposure in the region and the Indonesian government eases restrictions of the length of advance notice needed for those companies to extend their development contracts. Here, we will discuss some of these issues and look at the ways these policy changes could influence gold production in Indonesia for the rest of 2015.

“Earlier this month, the Indonesian government announced plans to allow metal miners greater flexibility in renewing their operating contracts,” said Tony Davis, metals markets analyst at Atlanta Gold and Coin. “This has led to upwardly revised output projections for companies like Newmont Mine, which is now expected to increase gold and copper production rates by as much as 25 percent this year.” In terms of the specifics of the new arrangements, Indonesia will now allow companies with major mining contracts to renew their development positions more than two years before their expiration dates. This will be particularly beneficial for exporters like Freeport-McMoran, which has announced massive plans for expansion for some of the largest metals mines in the region.

Another company that stands to benefit is Newmont Mine, which has also had its export permit extended after strengthening business pacts with Freeport-McMoran in 2014. Since these are two of the largest and most important mining development companies in the world, it is quickly becoming clear that the recent policy changes by the Indonesian government could have a significant influence on the worldwide supply of both gold and copper. Gold markets in particular have seen increased volatility over the last year. So if Asian investors are able to spot stabilizing trends in the metals space, it will likely be much easier to start constructing investment strategies to capitalize on the changes.

To get a sense of where we currently stand in the gold markets, let’s consider the following price chart: 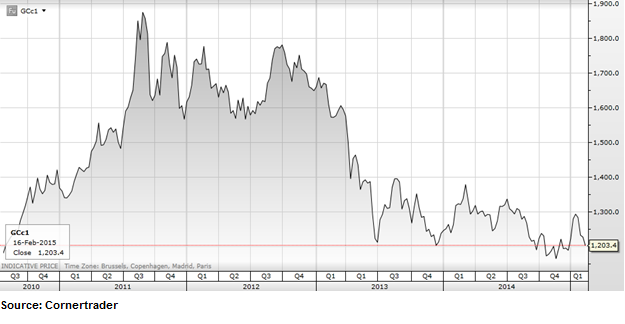 When we look at the price history in gold shown above, we can see that market prices have come off sharply from the all-time highs established in 2011. These moves have been propelled largely by the changing nature of the world economy and the uncertain outlook for output productivity in key regions of the world. Since the middle of 2013, we have seen seen some of these trend start to change, as the outlook grows more stable. For longer-term investors, this activity provides some interesting opportunities for those looking to start gaining long-term exposure in precious metals.

Since posting the all-time highs in 2011, gold prices have fallen more than 37 percent. Ultimately, this points to significant potential for gains if markets were to recover even halve of those losses. At the moment, there is no slowdown in the investment trends that have been exhibited by investors in Asia’s emerging markets, so these are all factors that will need to be considered by those contemplating added exposure in metals markets. Now that we are able to better assess the supply outlook for the coming year, it will be much easier to start basing positions on the developing price trends as they begin to establish themselves. The Indonesia story is one of the underreported stories in global metals markets, so it would behoove investors to start considering these developments as important factors when adding new position exposure.