It is estimated that about 1.2 million Indonesians experiment with drugs (roughly 0.50 percent of the total population). Nurul Ilmi Idris, Professor at the Hasanuddin University in Makassar (Sulawesi), informed that the number of Indonesian experimental drug users has risen from 850,000 in 2008, to 1.1 million in 2011, and now - in 2016 - stands at 1.2 million. Increasing drug consumption in Indonesia is also reason why Indonesian President Joko Widodo allowed various executions in recent years - including various foreign drug traffickers killed by firing squad.

Marijuana, methamphetamine, ecstasy and heroin are the most popular illegal substances that are used by Indonesia's 1.2 million drug abusers. In the mid-1990s heroin was a popular drug. However, due to a shortage of supply, fewer Indonesians are consuming heroin today compared to two decades ago. This is partly the result of Indonesia's tough stance on drug abuse. Those who are caught carrying drugs can face the death penalty.

The number of Indonesians injecting themselves with illegal drugs fell from 230,000 in 2008 to 70,000 in 2011. However, the use of psychoactive prescription drugs in Indonesia in fact rose over the same period. Abuse of the prescription medications, which include antidepressants and painkillers (somadril, subutex, subuxone, calmlet and tramadol), is particularly popular among teenage drug abusers.

Execution of Drug Traffickers in Indonesia

In July 2016 Indonesian authorities executed four people by firing squad - three Nigerians as well as one Indonesian (all convicted for drug trafficking) - on the remote Nusa Kambangan island (part of the province of Central Java). It was the third round of executions in Indonesia under the leadership of Widodo. Widodo takes a much tougher stance on drug-related crimes (compared to his predecessor) with the main goal being the safeguarding of Indonesians' health. Although the death penalty - especially for cases related to drug trafficking - is widely criticized abroad, there actually exists widespread support among the Indonesian population for the executions of drug traffickers.

However, there is no evidence that capital punishment for drug traffickers relates to a lower degree of drug crimes in society. Many point out that those who smuggle drugs are often not the big people behind global drug trade networks. Instead, they are usually men and women who are desperate to earn money to make a living and therefore accept the risky task of smuggling drugs into a specific country. In other cases those who are caught carrying drugs were unaware about their act because they were tricked. As such, executions will have limited impact. 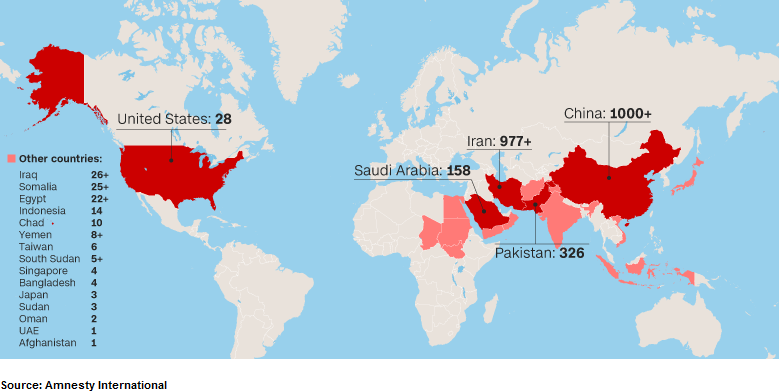