Robustly rising exports of cement and clinker so far in 2018 are a glimmer of light on the horizon for Indonesian cement manufacturers. Domestic conditions in Indonesia's cement industry remain less rosy as a massive inflow of investment in cement production facilities in recent years has given rise to a major cement supply glut.

The strong growth of cement exports is therefore a welcome surprise. In the January-August 2018 period a total of 3.62 million tons of cement and clinker was exported abroad, up 95.8 percent year-on-year (y/y) compared to the same period one year earlier. But although impressive in terms of relative growth, it has to be emphasized that aforementioned annual growth comes from a very low base. 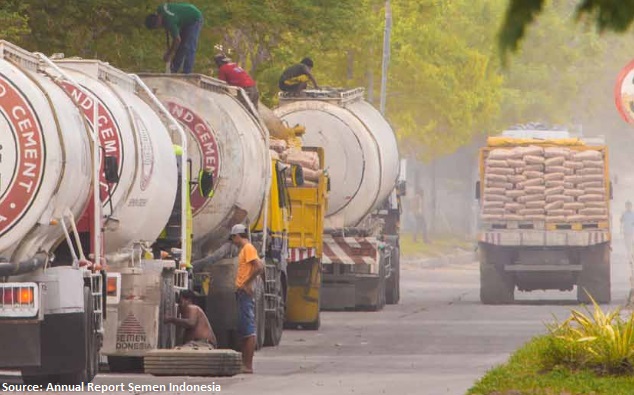 Based on the latest update from the Indonesian Cement Association (ASI), cement and clinker exports from Indonesia are targeted to reach 5 million tons in full-year 2018 (a serious upward revision from its initial target of 3.0 million tons).

However, when compared to domestic cement demand (estimated at 65-70 million tons in 2018), the export target is still rather insignificant. The positive news, however, is that - provided existing growth continues - cement and clinker exports will become a significant source of earnings for exporters in the next five years. This would also mean that the utilization of Indonesia's combined installed cement production capacity can rise significantly (which is currently very low at around 65 percent amid the supply glut).

In the month of August 2018 cement and clinker exports from Indonesia rose 31.1 percent (y/y) to 541,143 tons according to data from ASI. Meanwhile, Agung Wiharto, Corporate Secretary at Semen Indonesia, said cement and clinker exports of the Semen Indonesia Group soared 67 percent (y/y) to 359,827 tons so far in 2018 with most of its customers located in the Asia-Pacific region.

We move more and more in-depth analyses from our website to our monthly research report. This report can be purchased here.