On Monday 19 October 2020 Indonesia Investments released a new report, titled 'Introduction Omnibus Job Creation Law'. This report discusses the contents and consequences of the recently approved Omnibus Law as well as its controversial aspects (especially for workers and the environment).

"While the Omnibus Law has been approved by Indonesian parliament in early October 2020, there remain quite some matters that require more detailed regulation through soon-to-come presidential and government regulations. We can expect these within three months after enactment of the Omnibus Law, so probably somewhere in January 2021. The consequence is that the Omnibus Law in its current form does not answer all of our questions, but we do get an impression of the central government’s intentions.

The Omnibus Law shows that the Indonesian government is indeed eager to create a more attractive investment and business environment by cutting bureaucracy/red tape (and taking a tougher stance toward those regional governments that fail to assist investment realization in their regions), while making life a bit easier for business-owners (for example by cutting severance payment; in fact, the central government takes over a bit of the burden by financing six months of the severance pay through the Jaminan Kehilangan Pekerjaan, or JKP, program).

However, the reason why we are not too optimistic yet – and prefer to wait and see for the impact in the field – is because over the past decade or so we have seen the Indonesian government coming up with various ambitious and 'game changing' programs or plans. However, while they look good on paper, actual implementation in the field has always been the main problem. Indeed, by revising laws and regulations the central government should now be in a better position to push for improvements but we do want to see some evidence first.

Moreover, in terms of foreign direct investment (FDI), we do not think that there are quick solutions to boost FDI in the short-term. Obviously, the COVID-19 crisis is currently making investors abstain from investing. But Indonesia also has to develop a good track-record in terms of policy-making, policy-implementation, policy-monitoring, dispute resolving, and legal and regulatory certainty. Building this good track-record can certainly not be done overnight. On the contrary, it requires years of consistent and quality management to build that track-record.

Critics of the Omnibus Law argue it is too pro-business as it cuts some protections for workers and relaxes environmental rules, opening room for deforestation and pollution. Meanwhile, Indonesian government officials argue that the Omnibus Law relaxes the country’s rigid labor rules and streamlines environmental rules in order to improve the investment climate, thereby creating much-needed jobs.

The truth is probably somewhere in the middle. But, again, it completely depends on the way the new regulatory and legal framework is carried out in the field. The old framework did indeed have tougher environmental rules. However, that did not stop deforestation and other major forms of damage to the environment (because it has been easy to violate existing regulations due to weak monitoring, while civil servants - and judges - can be bribed to look away). So, having a more relaxed regulatory framework but at the same time solid execution and monitoring as well as a well-functioning judicial power should actually improve the situation for Indonesia’s natural environment under the Omnibus Law.

Similarly, Indonesia can have ‘pro-worker rules’ such as severance pay of 32 times the monthly wage under Law No. 13/2003 on Labor, but what does this mean when the majority of formal sector workers who make little money per month do not have the financial means to file a case to the Labor Court or Supreme Court when an employer refuses to pay out severance pay (and we should not forget that most workers in Indonesia are informal sector workers, hence lacking protection). So, generally, the Omnibus Law would in fact also improve conditions for workers (including pushing informal sector workers into the formal domain), provided the law is executed faithfully and carefully.

In sum, we consider the Omnibus Law a good initiative of the government in its quest to encourage higher economic and social development. However, first, it will require a number of presidential and government regulations that regulate all details, and second, actual implementation in the field (including upholding the new set of rules through law enforcement) is crucial. If not, then we are stuck with ‘business as usual’. 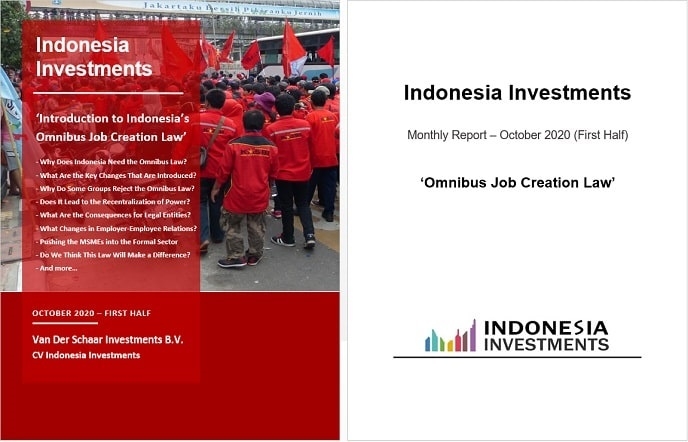