Considering the news seemed to have gone viral across the globe it is certainly worth devoting attention to Indonesia’s new Criminal Code (Kitab Undang-Undang Hukum Pidana, or KUHP). It is an important one because is the body of laws regulating how crimes are punished in Indonesia.

On 6 December 2022 – after decades in the making – the House of Representatives (DPR) of Indonesia passed the Criminal Code Bill into law in a plenary session at the DPR. The country’s new Criminal Code will replace the existing one that (basically) is relic of Dutch colonial law (and thus was in need of an update).[1] Earlier, in 2019, this Criminal Code bill (albeit in a slightly different form) was actually scheduled to be discussed by the DPR. However, after protests in front of Jakarta’s DPR building, it was decided to postpone these deliberations. Moreover, when the COVID-19 crisis struck in 2020, another (long) delay occurred as all public attention had to go to the handling of this crisis. Meanwhile, there is the possibility that a judicial review will cause a new delay as there exists some resistance against the new Criminal Code.

Based on Article 623, Indonesia’s new Criminal Code comes into effect three years after being signed by Indonesian President Joko Widodo. However, at the time of writing this article Widodo is yet to sign the document. Possibly, he wants to see the reactions first before signing the new law. After all, similarly to the Omnibus Law on Job Creation, there exists some resistance to the new Criminal Code. Therefore, it may still take some time before Widodo decides to put his signature at the bottom of the law. However, in the quickest scenario, Indonesia’s new Criminal Code could take effect at the very end of 2025. During the three-year period the government will engage in programs to get Indonesians acquainted with the new Criminal Code.

[1] The Dutch introduced its Criminal Code in the Dutch East Indies (present-day Indonesia) in 1918. After Independence in 1945 it took almost two decades for Indonesia to formulate its own Criminal Code (in 1963). However, this was (more-or-less) a literal translation of the Dutch Criminal Code. The new (2022) Criminal Code has – based on statements from politicians – been ‘Indonesianized’, meaning its content has been adjusted to the current Indonesian values, morals and ethics, and has been updated to match today’s modern age.

This is the introduction of the article. To read the full text you can order our December 2022 report, or, you can order this article separately by contacting us through email info@indonesia-investments.com or text message to +62.882.9875.1125 (including WhatsApp). 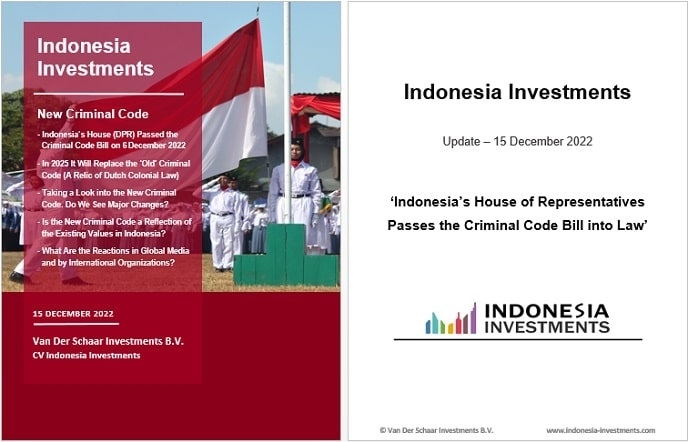