While global stocks have been moving in and out bearish territory amid severe volatility caused by China's economic slowdown and low oil prices, Indonesia's benchmark Jakarta Composite Index is one of the few stock indices that has risen so far in 2016 (2.64 percent since the start of the year). Foreign and domestic investors seem to regained confidence in Indonesian assets due to Indonesia's better-than-expected GDP growth in Q4-2015 and the knowledge that the Jakarta Composite Index already experienced a sharp correction last year, falling below its fundamental value.

Although Indonesia's full-year 2015 economic growth figure - at 4.79 percent year-on-year (y/y) - constituted a six-year low, the better-than-expected Q4-2015 GDP growth figure, mainly supported by government spending and gross fixed capital formation (particularly due to a surge in infrastructure development), provides optimism that Indonesia's era of slowing economic growth has ended and that the government's commitment to boost the nation's economic growth is no 'lip service'.

So far this year foreign investors have recorded a net buy of IDR 1.51 trillion (approx. USD $112 million) on the Jakarta Composite Index. 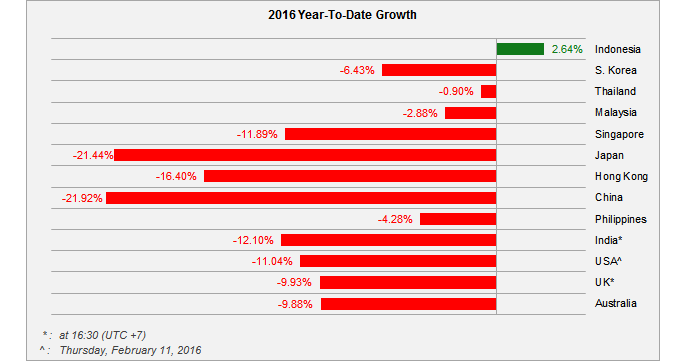