On Tuesday (13/10), Chinese authorities announced that the country's trade balance widened to 376.2 billion yuan in September 2015, beating forecasts. China's exports contracted less than expected at -1.1 percent. However, China's imports (-17.7 percent) plunged more than expected and now recorded the eleventh month of straight declines. Although the balance is better than had been forecast, China's latest import and export data show again that the world's second-largest economy is plagued by a persistent slowdown. 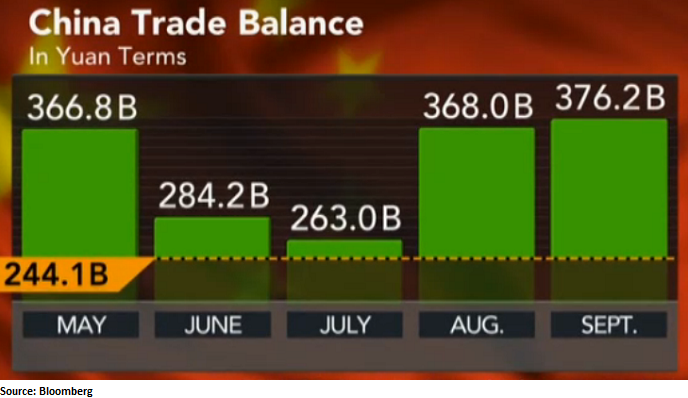 China is due to release its Q3-2015 gross domestic product (GDP) data on 19 October. Forecasts indicate that growth eased below 7 percent (y/y). China will also release consumer and producer price indexes data (due on Wednesday) as well as money supply figures (later this week).

Ahead and after the release of China's trade data, Asian stock markets tend to decline after last week's remarkable rally when investors added USD $936 million to US exchange-traded funds that buy emerging-market stocks and bonds, hence erasing two weeks of losses.

Today, Indonesian assets are the most badly-affected Asian assets. After a winning streak that lasted for six straight trading days, the benchmark Jakarta Composite Index climbed around 10 percent while the Indonesian rupiah appreciated over 8 percent against the US dollar between 2 and 12 October 2015. After the release of Chinese trade data investors are now engaging in profit taking. By 09:45 am local Jakarta time, the Jakarta Composite Index was down by 1,77 percent, while the rupiah had depreciated 1.50 percent to IDR 13,308 per US dollar (Bloomberg Dollar Index).