The international airports on Bali and Lombok will be closed for at least 24 hours starting from 07:15 am local Bali time as Mount Agung blasts volcanic ash in the sky. One day earlier, Indonesia's National Disaster Management Agency (BNPB) had raised the alert code to the highest level (red code) after Mount Agung erupted again on Saturday.

The alert code was raised as Mount Agung shifted from steam-based eruptions to magmatic eruptions.

Despite erupting over the weekend, Bali's Ngurah Rai International Airport, located about 70 kilometers northeast of this airport, remained open last weekend as Mount Agung's volcanic activity had stayed at the same level (despite the eruptions). However, various local and international airlines already announced they would cancel certain flights to the area. On Monday (27/11), when the two airports closed, it was reported that hundreds of flights were canceled and, thus, tens of thousands of travelers affected.

Read more: Volcano Eruptions and Other Natural Disasters in Indonesia

On Monday morning Bali's biggest airport shut down for (at least) 24 hours as volcanic ashes spread above Bali. Meanwhile, Lombok International Airport had already been closed since Sunday evening. Lombok, located at the east of Bali, was initially more affected because Mount Agung's ashes were carried eastwards.

BNPB said approximately 100,000 people living around Mount Agung are told to leave the danger zone, which was expanded to 10 kilometers from the crater (from a 7.5 kilometer danger zone previously). However, reportedly less than half have actually left as many locals refuse to leave behind their house, farm or business. 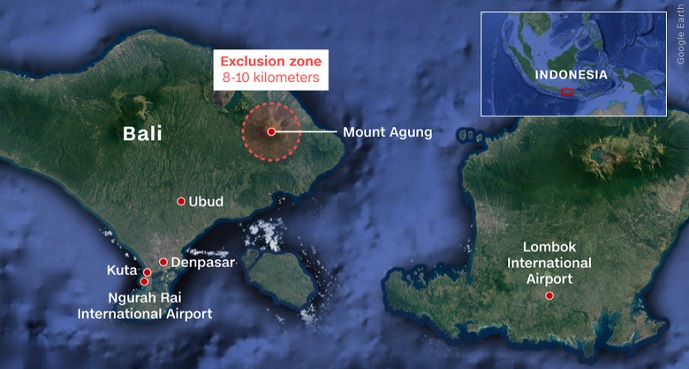