Although manufacturing activity in Indonesia rose slightly in July 2018, there are a number of reasons to be concerned. The headline seasonally adjusted Nikkei Indonesia Manufacturing Purchasing Managers' Index (PMI) indeed grew modestly from a reading of 50.3 in June to 50.5 in July (a reading of 50.0 separates contraction from expansion in the nation's manufacturing activity). However, overall conditions remain lacklustre in Southeast Asia's largest economy.

The July data show that new business increased for the sixth consecutive month in Indonesia's manufacturing sector. However, the pace of growth was only marginal. Moreover, for the first time in six months manufacturing output declined across Indonesia in July amid subdued demand. Meanwhile, foreign demand for Indonesian manufacturing products fell - albeit modestly - for the eight straight month, reflected by declining new export work.

Despite lacklustre conditions, Indonesian manufacturing companies raised their staffing levels for the second consecutive month. However, despite accelerating to the fastest pace since February 2018, job creation was only slight in July.

Thus, the text above paints a mixed picture of Indonesia's manufacturing sector in July. On the positive side: overall manufacturing activity rose (albeit modestly) on the back of rising new business, causing manufacturing companies to hire more workers. On the negative side: manufacturing output and new export orders fell.

The data thus indicate that modestly rising new business in Indonesia stemmed from the domestic market. However, it did not lead to a rise in output, thus implying that manufacturers still had plenty of stockpiles at their disposal.

Meanwhile, input buying across Indonesia's manufacturing sector continued to rise in July. However, the rate of expansion remained modest and weaker than the average observed over the current six-month period of growth. Meanwhile, pre-production inventories rose to the greatest extent since August 2016. Some companies mentioned stockpiling due to forecasts of increasing costs, while others commented on an expected improvement in demand conditions

Indonesian manufacturing companies also continued to be burdened by intense cost pressures in July. Moreover, the rate of input price inflation accelerated to a sharp pace that was near May's 31-month high. There were reports that rupiah weakness contributed to higher costs of imported raw materials. While the rupiah only depreciated 0.6 percent against the US dollar in July, the currency experienced a volatile performance, peaking above IDR 14,550 per US dollar before strengthening in the last week of the month.

And while Indonesian manufacturing companies had to face a sharp rise in input costs, they only raised their average prices at a modest pace in July. Anecdotal evidence indicates that subdued demand conditions had weighed on these companies' ability to fully pass on greater production costs to customers.

Aashna Dodhia, economist at IHS Markit, said "firms faced sharper inflationary pressures [in July] that emanated from the strength of the US dollar against the Indonesian rupiah. Although input cost inflation was close to May's 31-month high, it remained slightly below the historical average. Nonetheless, the central bank could remain under pressure to raise interest rates further to protect the rupiah amid uncertainty in global financial markets and wide interest rate differentials." 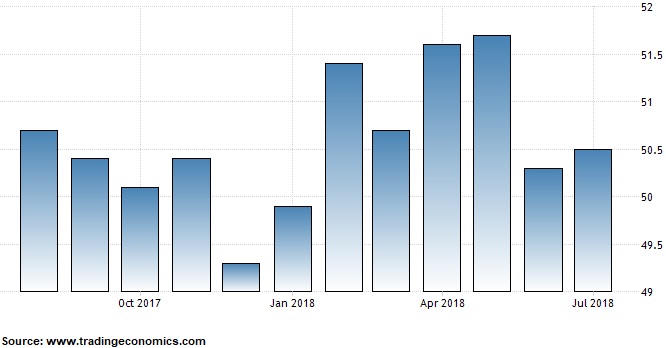