The declining crude palm oil (CPO) price in the world market and the imposition of the USD $50 per ton export levy on CPO by the Indonesian government, effective from 16 July 2015, has severely affected Indonesian oil palm planters with the worst affected being the small holders and plasma farmers as they carry the highest production cost.

The imposition of the CPO levy has resulted in an oversupply of CPO on the local Indonesian market, resulting in sharp drop of the local CPO price to below USD $500 per ton or IDR 6,900,000 per ton. The average production costs (including interest expenses) for the majority of planters is in the range of IDR 4,018,000 to IDR 4,680,000 per ton of CPO. This has resulted in the planters suffering losses. In addition, there are not enough refineries in Indonesia to process the CPO.

The export of CPO, as a percentage of all palm oil related products, has dropped to 20 percent from 70 percent previously while the export of processed palm oil has increased to 75 percent from 30 percent previously. While on the surface, this may seem okay, in actual fact, the increase in the export of processed palm oil comes at the expense of the oil palm planters that are suffering losses. This is not sustainable in the long term as the affected oil palm planters will cut down on fertilizer application and upkeep and this will result in lower production of fresh fruit bunches (FFB) in the medium term. Planters face bankruptcy and this would result in millions of jobs lost and the emergence of social turmoil.

The oil palm refinery industry will also suffer because the production of CPO will reduce drastically as many oil palm plantation have closed down.

This will then seriously affect the US dollar foreign exchange (forex) income for Indonesia as the export of CPO and processed palm oil drops due to the closure of oil palm plantations. Hence, the rupiah currency will depreciate further resulting, subsequently causing further accelerated inflation. Imports of fertilizer will become more expensive as the fertilizer is quoted in US dollar. This vicious cycle will continue and this would result in the collapse of the domestic oil palm industry, implying that Indonesia will no longer be the world's top CPO producer. Foreign investors will also shy away from investment in Indonesia as the investment becomes not viable coupled with depreciation of rupiah.

India, one of the world's major importers of CPO, has implemented a three year plan to develop two million hectares of oil palm plantations in India at a cost of USD $1.5 billion. This will impact the CPO and proceed palm oil export from Indonesia in the future if many oil palm plantations in Indonesia close down resulting in higher production cost for CPO and processed palm oil.

On the other hand, the planters in Malaysia will benefit as there is no export tax or levy for CPO.

The imposition of the current export levy of USD $50 per ton of CPO is not based on profit but on the tonnage regardless of the CPO price. Hence, the export levy was imposed even when the farmers are suffering losses due to the low CPO price. This is definitely not sustainable. In the past, the other form of tax, i.e export tax was implemented only when the CPO price was above USD $750 per ton and the planters are making profit. Now the net CPO price is only USD $425 and still dropping.

Proceeds from these export levies will be used to fund the government’s biodiesel (subsidy) program. While the idea is good but at the current low CPO price, this is not viable. It is much cheaper to use 100 percent diesel based on petroleum. We would like to highlight a few important factors and effects in relation to the levy imposed on CPO export:

As shown below, since July 2014 the price of palm oil has fallen below the threshold price of USD $750 per metric ton and it is expected to be low for the next two to three years due to low petroleum price.

For Indonesia - being the center of global production - palm oil is a top priority for the nation’s economy. With millions of hectares of palm oil plantation, the Indonesian government has come out with a scheme of “partnership” between the villagers with smallholders or companies. From research done, smallholder farmers account for about 40 percent of total plantations, equivalent to almost 4.2 million hectares representing about 20,000 smallholders in Sumatra and Kalimantan (year 2013; reported by the Oil Palm Smallholders Union, abbreviated SPKS).

Indonesia's Independent smallholders own more than 3.1 million hectares of these farmlands. These independent smallholders cultivate palm oil without outside help. On the contrary, plasma shareholders can access agricultural inputs such as seed stocks and fertilizers in lieu to their partnership scheme with the companies.

Those who are involved in this industry earn an adequate living. Even the smallholder partner or plasma farmer that owns a two hectares farm can enjoy a net monthly income of about IDR 3 million to IDR 4 million when the currency is still at the level of around IDR 12,500 back in 2014.

It is also important to note that - based on research conducted in 2008 - 3.5 million households (about 14 million people) of farmers and employees make a living from oil palms (“on farm”). The number of those indirectly involved in the palm oil industry (“off farm”) is even much bigger. These are the people involved in the development of local suppliers, contractors (transportation, construction, etc) and village market workers.

As shown above, agriculture, forestry, hunting and fishing industry contributes more than 35 percent or equivalent to about 41.2 million workers in the workforce in Indonesia compared to other sectors back in year 2012.

However if the sentiment of the rupiah currency continues to weaken and the levy starts to kick-in which will discourage the buildup of the USD currency, most of the smallholders and plasma farmer will not be able to sustain. We are all aware that fertilizer, which is one of the most important elements in oil palm plantation, is an imported item. This will cause the price of the fertilizer to increase tremendously and the smallholders or plasma farmers will not be able to sustain this high jump in costs. Hence, it will result in declining production of their FFB for the coming months. Once this happens, the whole country’s production will be declining and unable to meet the government's CPO production target (and automatically the supply to the refinery for CPO processing will be effected). The table below shows Indonesia's CPO production in recent years as well as the government's 2015 production target.

Secondly, when the CPO price is controlled by local players since the levy is fixed at a very high pricing, these smallholders and plasma farmers have no choice but to sell their FFB to the mill at a lower price since the CPO price in Indonesia is lower by at least USD $30 per metric ton (taking into consideration of levy imposed on CPO at USD $50 per metric ton).

About 40 percent of the plantations owned by smallholders and plasma holders will slowly perish in less than one year due to these two major factors. Therefore, the Indonesian government’s Economic Program of producing no less than 40 million tons of CPO by 2020 with 10 to 12 million hectares cannot be achieved. 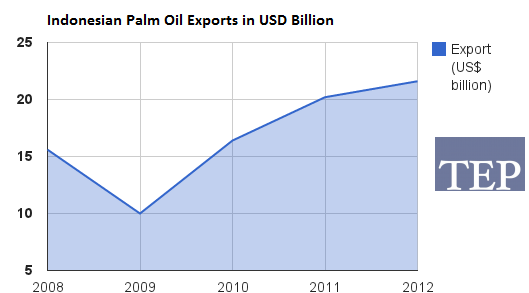 As reported by Indonesian Palm Oil Association (GAPKI), Indonesia’s export of CPO and processed palm oil for July 2015 fell 8 percent (month-on-month) to 2.1 million tons (this was 15 days after the import levy was implemented).

The views expressed in this column are the views of the author and therefore do not necessarily reflect the views of Indonesia Investments, read disclaimer.