Indonesia's manufacturing activity stabilized slightly below the neutral mark. Output stabilized but both new orders and employment fell, albeit slightly. Meanwhile, production costs for manufacturing companies rose rather sharply, and amid subdued demand these costs could not be passed on to customers.

Key problem in the manufacturing sector is that demand remains bleak, hence total new orders fell for the second month in a row. Not only domestic demand but also global demand for Indonesia's manufacturing output fell in the first month of 2018, hence new export orders fell further.

In these circumstances Indonesian manufacturing companies decided to reduce their payroll numbers for the 16th (!) consecutive month, albeit the rate of job shedding was marginal.

Meanwhile, growth in prices of raw materials continued to put pressure on manufacturer companies' cost burdens at the start of 2018.

However, despite the current bleak conditions, the Future Output Index signaled confidence towards the 12-month outlook for manufacturing production, with more than half of the survey panel forecasting higher output. Meanwhile, expectations of an improvement in demand, enhanced marketing initiatives and planned company expansion plans were all cited as key factors driving this optimistic view.

Aashna Dodhia, Economist at IHS Markit, commented on the latest data saying "following a marginal deterioration in December 2017, there were tentative signs of stabilization in Indonesia's manufacturing industry as output was relatively stable in the first month of 2018. However, new orders fell for the second consecutive month, albeit slightly, amid reports of lackluster client demand."

"Weak overseas demand continued to be a key factor driving the reduction in total new business. Furthermore, new export sales dropped at the fastest rate since March 2017. Overall, appreciation of the Indonesian rupiah relative to the US dollar may put further pressure on rejuvenating foreign demand for Indonesian goods," Dodhia continued. 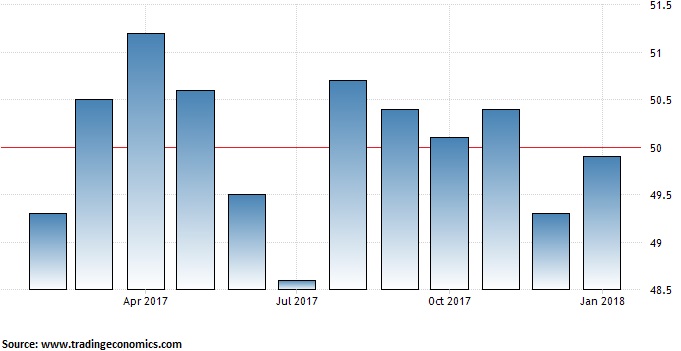