Manufacturing activity in Indonesia expanded in September 2018. However, the pace of growth slowed compared to the preceding month. The Nikkei Indonesia Manufacturing Purchasing Managers' Index (PMI) declined from August's 26-month high of 51.9 to 50.7 in September (a reading of 50.0 separates contraction from expansion in the manufacturing sector).

Indonesia's manufacturing sector lost some momentum in September 2018 as a reading of 50.7 indicates a very modest level of expansion in terms of manufacturing activity, thus pointing to a marginal improvement in manufacturing conditions across Indonesia.

September's (modest) manufacturing growth was supported by strong domestic demand. This domestic demand managed to push Indonesia's manufacturing output in positive territory. New orders grew for the eighth-consecutive month in September. However, the rate of expansion eased to the slowest in three months and was marginal.

Meanwhile, Indonesian manufacturers had to face higher input costs in September due to the weak rupiah (against the US dollar), while the pace of Indonesian inflation remained solid overall. As a consequence, companies raised their output charges solidly, thus passing on higher cost burdens to customers.

It was also reported that Indonesian manufacturing firms expanded their purchasing activity in September, thereby stretching the current period of growth to eight months. However, the latest rise was marginal and the weakest since March 2018.

Meanwhile, pre-production stocks rose at a marginal rate in September, while inventories of finished goods declined at the fastest pace since last March. 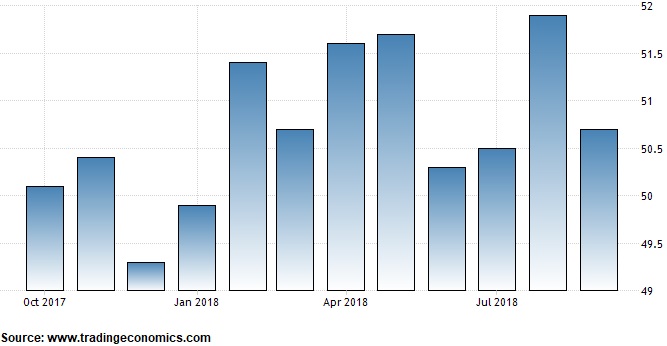 Lastly, confidence among Indonesian manufacturers towards the one-year outlook for manufacturing output strengthened to the strongest in four months in September. Optimism is linked to plans for product diversification and enhanced marketing initiatives, according to panelists. That said, the latest reading remained below the historical average.

Aashna Dodhia, economist at IHS Markit, commented on the latest data saying: "Indonesia's manufacturing sector lost some growth momentum in September, reflecting slower rises in output, new business and employment. Nevertheless, there were reports that the latest upturn was driven by strong underlying demand. Prices data signaled warning signs, amid reports of currency weakness relative to the US dollar, as input cost inflation accelerated to the sharpest since September 2015."

"Despite margins being squeezed, the level of sentiment strengthened to the highest since May 2018. Company plans of pursuing enhanced marketing initiatives and product diversification were the key factors behind positive projections for output over the year ahead, according to anecdotal evidence," Dodhia continued.