PT Adaro Energy Tbk is a leading Indonesian coal mining company and Indonesia's second-largest producer of thermal coal. Adaro Energy has developed into a vertically integrated organization, with pit-to-power subsidiaries including mining, barging, ship-loading, dredging, port services, marketing and power generation. The company operates the largest single coal mine in the country (in South Kalimantan) and aims to be a leading integrated coal mining and energy group in Southeast Asia.

Adaro Energy and its subsidiaries are engaged in coal mining and trade, coal infrastructure and logistics, mining contractor services, and power generation. Each operating subsidiary is positioned as an independent and integrated profit center in order for Adaro Energy to have a competitive and reliable coal production and a coal supply chain. In the future, Adaro Energy may publicly list its subsidiaries to support further growth and development.

Through subsidiary Adaro Indonesia, the company operates a concession in South Kalimantan (the principal mining location of Adaro Energy) which involves three mines: Tutupan, Wara and Paringin. Coal that is produced in these mines are mostly supplied to blue-chip power utilities in both Indonesia and worldwide. Adaro Energy also has mining assets in South Sumatra, Central and East Kalimantan.

The company, which started its commercial operations in Indonesia in 1992, is one of the top five exporters in the global seaborne thermal coal business and the largest supplier to Indonesia's domestic market. Adaro Energy produces a preferred type of sub-bituminous coal trademarked as Envirocoal. This high-quality, low-pollutant coal contains ultra-low ash, NOx and sulphur, and has a low-to-moderate heat value ranging from 4,000 kcal/kg to 5,000 kcal/kg on a gross as received basis (GAR).

As the coal mining industry has been plagued by low coal prices since the late 2000s, Adaro Energy has been increasingly focusing on power generation through the construction of coal-fired power plants. Given the company’s access to large coal reserves and Indonesia’s demand for electricity, the power generation business segment is expected to become a valuable asset to the company providing the company with healthy returns and stable cash flows, offsetting the negative impact of volatile coal prices on its corporate earnings. Amid solid economic growth Indonesia’s electricity demand is forecast to nearly triple to 17 quadrillion BTUs by 2030 (McKinsey estimate).

Adaro Energy produces coal that is less environment unfriendly due to its low content of sulfur, nitrogen and ash. This coal is globally trademarked as envirocoal. About 25 percent of its coal production is consumed on the domestic market, mainly for power generation by coal-fired plants. Major export markets of Adaro Energy's coal are India, Spain, Japan, South Korea and China.

In addition to its coal reserves, Adaro has various other assets to support its operations, such as the 75 kilometer-long haul road connecting the mine location to the crushing facility in Kelanis (Kalimantan) as well as a coal terminal on Pulau Laut. And - through a subsidiary - Adaro Energy possesses a full mining fleet.

• Adaro´s operations are located far inland and in remote locations
• Coal mining is long-term, high-risk, slow yielding, volatile and a cyclical business
• Mine development is capital-intensive and requires specialized knowledge
• Limited product line (although the company is diversifying into power generation and will have varying products from low rank coal to coking coal through its acquisitions)
• Alternative energy sources compete as suppliers for power generation
• Regulatory uncertainty in both domestic and export markets
• Growing concern on environmental impact of carbon emissions
• Development in China, India and Mongolia allows for greater coal supply
• Global economic slowdown reduces coal demand 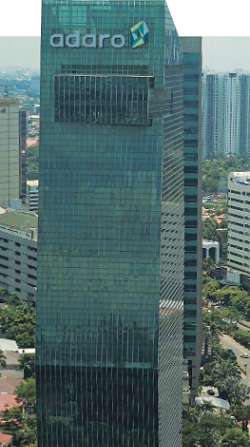