Indofood Sukses Makmur Tbk (Indofood) is a company that has operations in each stage of Indonesia's food manufacturing process: from the production of raw materials and its processing to consumer end products on the retailer’s shelf. Indofood is Indonesia's largest food processing company and the world's biggest producer of instant noodles. The company forms part of the Salim Group, Indonesia's biggest conglomerate, founded by Sudono Salim.

Indofood Sukses Makmur engages in operations in five complementary strategic business units. The table below lists these units and shows their contribution shares to total sales of the company.

Bogasari is the largest integrated flour miller in Indonesia. Its two mills are located in Jakarta and Surabaya (Java). Its operations are supported by shipping operations (for wheat transport) and a textile facility (for the production of bags). Bogasari not only produces a variety of wheat flour for different purposes under prominent brands but is also the largest pasta producer in South East Asia (the La Fonte brand). Its pasta products are exported to various countries, including the Philippines, Korea and Japan.

Indofood's Agribusiness Group is a vertically integrated operation chain that owns a number of leading brands derived from palm oil. Its operations cover the whole value chain from research and development, oil palm seed breeding and cultivation to milling, refining, branding and marketing of cooking oil, margarine, shortening and other palm oil derivative products. In addition, the group also engages in rubber, cocoa, sugar cane as well as tea plantations.

The Distribution Group (which also distributes third-party products) has one of the most extensive distribution networks of Indonesia, penetrating almost every corner of the archipelago. The number of stock points has been expanded aggressively since 2005. Stock points are located in areas with a high density of retail outlets, including traditional markets.

In 2013, the company added the Cultivation and Processed Vegetables business segment to its corporate structure. Activities in this segment are conducted by China Minzhong Food Corporation Limited (CMFC), an integrated vegetable processing company in China which is listed on the Singapore stock exchange (SGX).

Indofood is one of the (relatively) few companies in Indonesia that looks beyond the domestic market. Its aspirations to become a global player can be seen in the establishment of joint venture companies with Singapore-based Asahi Group Holdings Southeast Asia Pte. Ltd. (to enter the fast growing non-alcoholic beverage market) and a Memorandum of Understanding with Japan's Tsukishima Food Industry, Co., Ltd. (to engage in the production of value-added oil and fats for the food service industry).

In 2013, Indofood acquired 50 percent of the shares in Companhia Mineira de Acucar e Alcool Participacoes (CMAA), a Brasilian sugar and ethanol producer, and expanded its stake in CMFC to 29.33 percent. 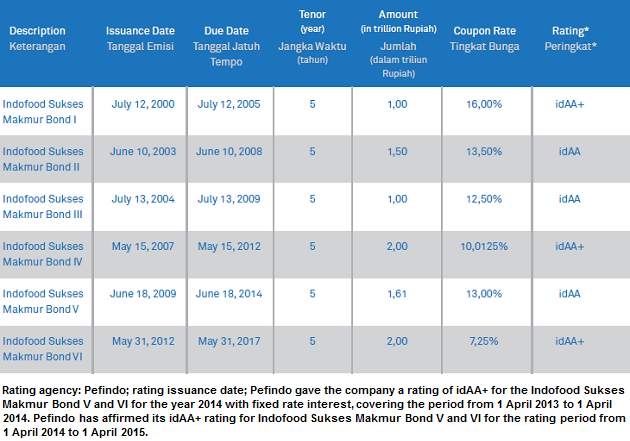 Indonesia's recent economic growth is to a large extent due to Indonesia's robust domestic consumption. Not only does Indonesia contain one of the world's most populous populations, but it also constitutes a population that is burgeoning; the country's middle class is expanding rapidly and it shows in their consuming habits. A larger portion of people's disposable income can be spent on consumer products. As such, businesses that largely rely on Indonesia's consumer base have good prospects. McKinsey expects that Indonesia will move from its current position as the world’s 16th largest economy to the 7th largest economy in the year 2030, partly supported by domestic consumption as income per capita continues to rise in combination with rapid urbanization. The size of Indonesia's consuming class is expected to more than triple over the same period, from 45 million in 2012 to 135 million in 2030. As one of the largest food companies in Indonesia, Indofood is well-positioned to capture these opportunities.