Since the Second Indonesian Youth Congress (held on 28 October 1928), the song “Indonesia Raya” (Great Indonesia) has been the most important song for the Indonesian people. The song, written by Wage Rudolph Supratman, was born at a time when Indonesia’s nationalist movement reached its peak. After a gradual 3-century long process of political and economic expansion, the Dutch colonizers had created a king-sized colony (containing roughly 17,000 islands) by 1928 that had taken the territorial boundaries of present-day Indonesia.

With a total area of about 1,904,569 km², Indonesia is the world’s 15th largest country in terms of land size, and the world's largest archipelago. Such a wide geographic area implies that an enormous amount of cultural diversity can be found within the boundaries of the country.

Indeed, when we compare an Acehnese Muslim in the far western part of the Archipelago to a tribal animist family in Papua in the far eastern region, there seem to be more differences than similarities. However, there is one important unifying factor between the regions of Indonesia: subordination to colonial rule (although not all Indonesian islands experienced the same ‘degree of colonialism’).

This aforementioned political and social context shaped the essence of the message conveyed in the series of youth sessions organized in late October 1928. Indonesia’s nationalist movement, which had been developing since approximately 1900 and assumed solid forms after the establishment of Budi Utomo (the first native political society) in 1908, was well aware about the diverse cultural and historic backgrounds of all regions. However, this movement also realized that unity of the colony (unity of the people) was key to overthrow the colonial system and reach Independence.

The Second Indonesian Youth Congress (the first one had been held two years previously but did not lead to any results), organized on 28 October 1928, thus came with the following youth pledge (sumpah pemuda), emphasizing the unity of Indonesia:

It was during this Second Indonesian Youth Congress that Wage Rudolf Supratman performed the song Indonesia Raya for the first time (on violin). Supratman (1903-1938) was a journalist, musician and teacher who had written this song in the context of the Youth Congress. 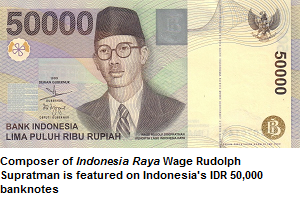 However, as this Youth Congress was basically a subversive movement in the late colonial days of Indonesia and the lyrics of the song Indonesia Raya were considered too nationalistic (although the original version did not contain the lyrics "merdeka" or "Independence"), it was quickly banned by the Dutch colonizers. As the nationalist movement developed further, the colonial authorities reacted with an act of suppression.

Young national leaders, such as Soekarno and Mohammad Hatta were arrested and exiled. Therefore, distribution of the (highly popular) lyrics and melody of Indonesia Raya had to be done secretly (by political and student organizations). However, also the domestic press, which had been developing since the second half of the 19th century, played an important role. Newspapers, including Soeloeh Rakjat Indonesia and Sin Po published the lyrics (it is interesting to compare the influence of the early printing press to today’s influence of social media on authoritarian regimes).

The Dutch colonizers were powerful enough to hold back Indonesian nationalism by arresting its nationalist leaders and suppressing nationalist organizations. However, the Dutch would never be able to eliminate widespread nationalist sentiment. The Indonesians, on the other hand, did not have the power to compete with the colonial rulers and therefore were dependent on external forces to eliminate the colonial system.

In March 1942 the Japanese, fuelled by their desire for oil, provided help by occupying the Dutch Indies. Although the Japanese period (1942-1945) would become a period characterized by hardship (scarcity of food, clothing and medicines as well as forced labour under harsh conditions), the Japanese also educated, trained and armed young Indonesians and gave their nationalist leaders a political voice. This enabled the nationalists to prepare for a future independent Indonesian nation. In the final months before Japan's surrender, effectively ending World War II, the Japanese gave full support to the Indonesian nationalist movement. On 17 August 1945, two days after the Nagasaki atomic bombing, Soekarno and Hatta proclaimed the independence of Indonesia. At this occasion the song Indonesia Raya became the national anthem of the Republic of Indonesia.

Several years later, in 1950, the Indonesian government requested Jozef Cleber, a Dutch musician who had been active in Indonesia since 1948, to make a symphonic rendition of Indonesia Raya. After finishing his first symphonic version of the anthem, Cleber presented it to President Sukarno. The latter, however, disagreed with Cleber’s arrangement and requested a more majestic version (similar to the Dutch anthem Wilhelmus). After a second version had also been rejected, Sukarno approved Cleber’s third arrangement which is still in use today.

Since 1958, the copyright to the song is owned by the Indonesian state.