It is a brave decision amid the aggressive tightening of monetary policies that we are witnessing in countries like the United States (US), European Union (EU), and United Kingdom (UK) in their quest to combat high inflation.

Bank Indonesia has clearly been facing a dilemma over the past couple of months: leave the benchmark interest rate unchanged to facilitate economic activity at home (particularly in the form of credit growth) but face capital outflows that put pressure on the Indonesian rupiah and stocks as a consequence, or, join the global monetary tightening wave to limit capital outflows but put the brakes on domestic economic growth.

To put Indonesia’s monetary policy into context we first take a quick look at the US, EU, and UK. In mid-June 2022 the US Federal Reserve went for a 75 basis point (bps) hike to its benchmark Fed Funds Rate, which was the biggest increase since 1994. A main consideration was that US inflation is running at a 40-year high. While Federal Reserve Chairman Jerome Powell commented on the June rate hike stating that this “75 bps increase is an unusually large one, and I do not expect moves of this size to be common”, many analysts believe that the Fed’s July meeting may involve a debate among policymakers over whether to opt for a 50 bps or (another) 75 bps hike. And so, we are seeing further signs of aggressive monetary tightening in the world’s top economy.

When a higher Fed Funds Rate is driven (mainly) by worries about inflation, then it is likely to be disruptive for emerging markets (including Indonesia) as it becomes more attractive for the global investor community to sell investments in local assets (with the emerging market assets typically being riskier assets) in exchange for US dollar-denominated investments. However, to what extent these emerging markets are going to be disrupted by the higher Fed Funds Rate also depends on the domestic conditions in the emerging market itself. Therefore, when a country shows certain macroeconomic vulnerabilities, it tends to be more sensitive to a rise in US interest rates.

Two months ago, we had already devoted an article to this topic. Contrary to the previous US tightening cycle around 2018 – when Bank Indonesia Governor Perry Warjiyo continuously emphasized on the importance to be “ahead of the curve” – we now see Bank Indonesia being well behind the curve. Why is this so? Well, simply because Indonesia’s wide current account deficit has turned into a small surplus on the back of strong exports (particularly related to high prices of palm oil and coal). This then also allows stronger foreign exchange reserves for Indonesia.

This is the introduction of the article. To read the full analysis, you can purchase the July 2022 edition of our monthly report. For further information you can contact us through info@indonesia-investments.com or +62.882.9875.1125 (including WhatsApp chat messages). 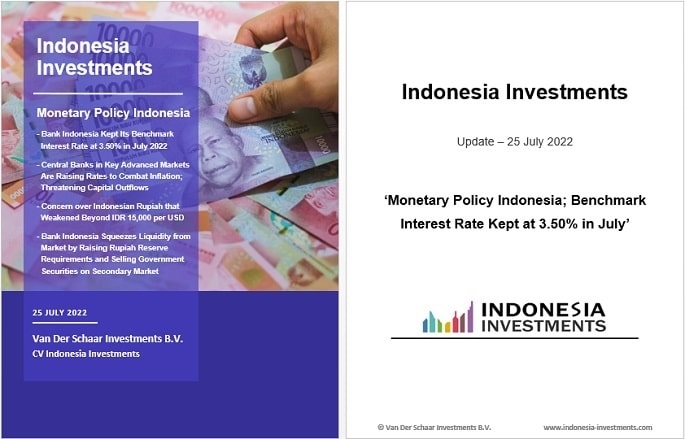