As regards Indonesia’s investment and business environment, there were a couple of interesting developments in February 2021. These were developments that – in our opinion – help to strengthen the economy of Indonesia in a fundamental way, albeit it will take a few years (as well as the assistance of other reforms) to fully enjoy the fruits of this labor.

In that sense, the Indonesian economy is like a massive oil tanker or a massive cargo ship in the middle of the open ocean: any turns cannot be sudden and quick. On the contrary, it takes a lot of time to turn the ship around.

It also takes a lot of time and energy (and commitment, meaning: no policy flip-flops) to turn Indonesia’s investment environment into ‘investor heaven’. Examples of big bottlenecks that prevent a sudden turn for the Indonesian economy are thick layers of bureaucracy (red tape), weak cooperation and coordination between central and regional governments, lack of infrastructure development (both in terms of quality and quantity, including the power supply), weak policy and legal certainty, rapidly rising minimum wages, corruption, and low quality and skills of human resources.

These are all issues that require many years – some may even require a generation – before conditions become truly conducive. And although this last sentence can be perceived as pessimistic, the positive news is that the Indonesian government under the leadership of President Joko Widodo has been eager – from the very start in 2014 – to impose the much-needed structural reforms that, in time, allow a faster pace of economic and social development for Indonesia. Just like his first presidential term, Widodo started his second term with something special.

At the start of his first term (in October 2014), Widodo rigorously slashed energy subsidies, while redirecting a large chunk of the freed up funds to the government’s infrastructure development budget. Cutting the energy subsidy budget is certainly no easy act for an Indonesian president in a country where people’s addiction to the energy subsidies is high, and therefore even implies some political risks as it is easy for political opponents to criticize such policies.

And, while it is true that the central government became more generous in terms of energy subsidy spending ahead of Indonesia’s legislative and presidential elections in 2019 (which is obviously not a coincidence), Widodo has shown that he remains committed to the infrastructure development program. This is what separates him from his predecessors. Whereas his predecessors in the Reformation era seemed not too interested in infrastructure development, probably because these projects are long-term projects in nature that do not bring advantages in the short term (in fact, they are painful on the short-term as these projects are capital-intensive and often involve the forced eviction of local communities, and thus prompting allegations of human rights abuses), Widodo seems less concerned that future governments will sow what he reaped.

Meanwhile, at the start of Widodo’s second presidential term (in October 2019), he introduced something else that we regard special: the Omnibus Law on Job Creation (Law No. 11 of 2020 on Job Creation), a landmark law that will significantly improve both the business and investment environment of Indonesia (or, at least, that is its purpose), especially by increasing the ease of doing business (for example by cutting red tape).

This Omnibus Law on Job Creation covers quite a lot of territory and ordered the drafting of many derivative laws and regulations to regulate matters in much more detail. One of these derivative regulations is Presidential Regulation No. 10 of 2021 on Investment Business Activities, signed by Widodo on 2 February 2021. What this regulation does – among other things – is opening up investment opportunities for foreign investors by reducing the number of businesses that are subject to specific foreign ownership restrictions to 46 business fields only (from previously 350).

Another interesting news item, confirmed by Widodo in mid-February 2021, and one that should impact positively (and structurally) on Indonesia’s economic and social development is the establishment of the country’s very own Sovereign Wealth Fund (SWF), called Indonesia Investment Authority (INA). INA started its activities per direct in February 2021. With tens of trillions of rupiah being pumped into this agency (from the central government’s State Budget), it has the task to carry out strategic investments that trigger structural economic expansion. Based on news reports in local media it will prioritize investment in infrastructure development first, thereby aiming to tackle one of the biggest bottlenecks in Indonesia’s business and investment environment as weak infrastructure pushes up logistics costs. In combination with the government’s ever-rising infrastructure development budget, it means we expect to see some strong development in the years ahead.

So again it is confirmed that President Widodo continues to go for structural reforms that strengthen the Indonesian economy, also in his second term. Most likely, this is what will define his legacy although it may take years, possibly even decades, before this becomes visible to all considering many of the structural reforms require years before their impact is truly felt across society. Future governments should not forget to pay tribute to Widodo since they are set to benefit from their predecessor’s hard work and courage, and – possibly even more important – they have to continue his approach (because if there is one thing investors hate it is seeing policy flip-flops).

And, while we do always remain somewhat skeptical of the ambitious plans that are unfolded by the Indonesian government, we feel Widodo is now on the right track. About a decade ago, the government under the leadership of former President Susilo Bambang Yudhoyono came up with a very ambitious plan, called the Masterplan for Acceleration and Expansion of Indonesia's Economic Development (abbreviated as MP3EI), that would turn Indonesia into a developed country by 2025, with annual economic growth up to 7.5 percent. This grand plan led to nothing. Or, more recently, Widodo came with a series of ambitious economic policy packages in his first term as president. However, we are yet to meet someone who feels those packages were a success.

And the same goes for plenty of ambitious roadmaps in a range of business sectors, or a variety of generous tax incentives that look attractive on paper but managed to attract relatively few investors to Indonesia.

All these efforts always let to the conclusion that the Indonesian government is very good in designing ambitious plans and programs, while actual realization in the field is disappointing. And when one program disappoints, then a new one is designed on top of (or instead of) the older one, without touching the roots of the problem.

In our opinion, the reason why much of the above has failed to attract investment, and failed to support the economic and social development of Indonesia, is because there are bigger and structural bottlenecks that are deeply rooted in the Indonesian economy and society. In the second paragraph of this introduction we have actually already listed these bottlenecks. So, for instance, a (superficial) tax incentive will not do much to persuade foreign players to invest in Indonesia as long as, for example, there is a low degree of policy certainty, or, there is an insufficient supply of power.

So, seeing Widodo’s infrastructure focus, the Omnibus Law on Job Creation, and INA we have become more optimistic about Indonesia’s future conditions as these three developments essentially tackle the underlying bottlenecks in the economic system (instead of simply offering a ‘superficial sweetener’ to investors). The crucial matter, however, is that future Indonesian governments will need to continue this approach as it still requires a long journey before the investment environment becomes truly great. Risks are that future cabinets take a much more nationalistic (or anti-foreign investment) stance, or, simply prefer to devote their time and money to short-term, consumptive programs in search of popularity among the Indonesian people. So, we certainly hope that Widodo has set a good precedent in this respect.

We discuss these topics in more detail in this February 2021 edition of our monthly report. Other key topics that deserve attention in this month’s report are Indonesia’s economic recession and the rise in poverty. Both topics are highly interrelated and, obviously, the consequence of nations’ self-imposed social and business restrictions (or lockdowns) that aim at preventing the spread of COVID-19 virus in society. 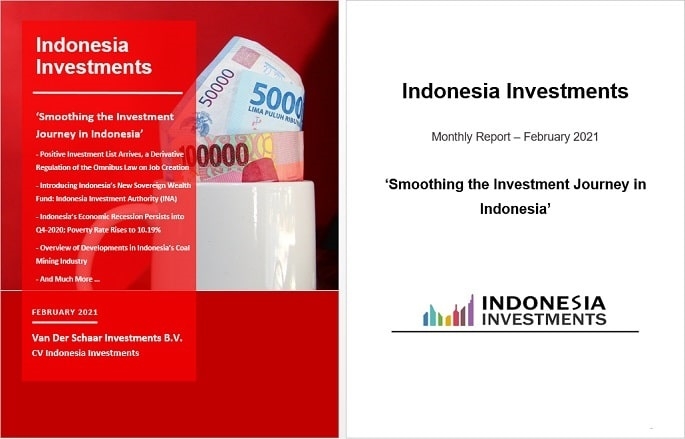