Economic growth is important to create jobs and therefore slowing economic growth means that job generation is curbed. Earlier today, Statistics Indonesia announced that Indonesia’s Q1-2015 economic growth slowed to 4.71 percent (y/y), the weakest pace in five years, and far away from the +7 percent (y/y) GDP growth figure that is targeted by President Joko Widodo by the end of this term in 2019, or the 5.8 percent (y/y) growth target that was set in the 2015 State Budget.

Indonesian Economic Minister Sofyan Djalil said that besides slowing economic growth another problem is that investment in Indonesia tends to be capital-intensive rather than labour-intensive and therefore the country’s unemployment rate has difficulty to decline. The main reason why investors are not eager to engage in labour-intensive investment is because they are concerned about rapidly rising minimum wages in Indonesia. Over the past two years, these wages have increased significantly and cause financial troubles for businesses.

In order to reverse the economic slowdown (that started in 2011), analysts say that Indonesia needs to implement more reforms, especially in an effort to boost infrastructure development. Currently, the country’s infrastructure projects are hindered by red tape, land acquisition troubles and lack of financial resources as the private sector is generally uninterested to invest in costly infrastructure projects that need a lot of patience before they see returns. 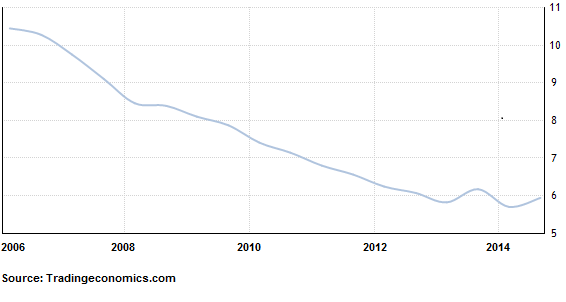