Indonesian markets are back open after the week-long Idul Fitri holiday. And, it was not the greatest opening, with Indonesian stocks, bonds, and the rupiah under heavy pressure. Moreover, Indonesian inflation accelerated quite rapidly in April 2022.

While it was expected that Indonesian assets would be under pressure due to quite aggressive monetary tightening in the United States (where the Federal Reserve – in line with market expectations – raised its benchmark interest rate by 0.50 percent after concluding its policy meeting on 4 May 2022), it was a bit of a surprise for us to see Indonesian inflation accelerating at a significantly faster pace than previously anticipated.

Based on the latest data from Indonesia’s Statistical Agency (Badan Pusat Statistik, or BPS), released on 9 May 2022, Indonesian inflation was recorded at 0.95 percent month-on-month (m/m) in April 2022, implying that the year-on-year (y/y) figure rose to 3.47 percent. Based on a central bank (Bank Indonesia) survey conducted in the third week of April 2022, we had expected that the annual inflation figure would be around 3.20 percent (y/y) in April 2022.

The main question now is: will Indonesian inflation ease starting from May 2022 as the impact from the Ramadan-Idul Fitri period and the impact from the value-added tax hike wane (implying that we are dealing with temporary pressures only), or, are these recent inflationary pressures also heavily influenced by imported inflation? If these inflationary pressures particularly originate from abroad, then we would need to attribute this to the Russo-Ukrainian war. This war pushed energy prices to multi-year highs, and considering energy is a crucial ‘ingredient’ for production, it causes price pressures of everything that is produced (and imported into Indonesia).

This is the introduction of the article. Contact us to purchase the full article. You can contact us by sending an email to info@indonesia-investments.com or a message to +62.882.9875.1125 (including WhatsApp). 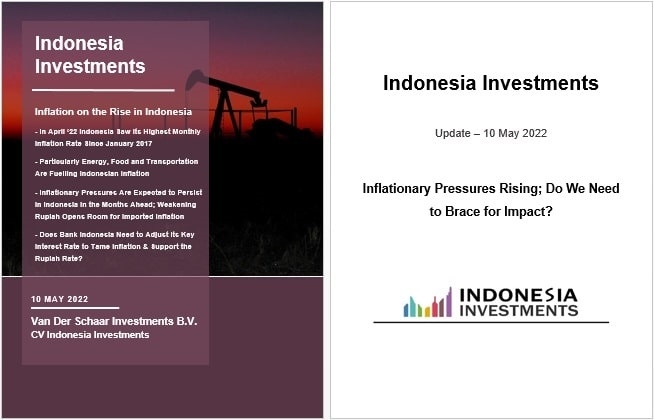