Over the past decade, cryptocurrency has increasingly become a hot topic in global media with Bitcoin – the first cryptocurrency, and the one that has become the most valuable and commonly held among the more than 10,000 cryptocurrencies that are traded publicly – in particular being in the spotlight.

While many regard cryptocurrency the currency of the future, many others regard it a risky (highly speculative) investment. Meanwhile, central governments as well as central banks around the world also seem to have trouble handling this relatively new phenomenon that on the one hand clearly threatens to undermine traditional state power (in monetary respect), if given legal status, as central banks do not have control over the supply of crypto (opposed to central bank currency, cryptocurrency is typically decentralized), but on the other hand these cryptocurrencies could form a revolution that is similar to the likes of the Internet revolution in the 1990s (and could therefore revolutionize industries, and perhaps even revolutionize life itself).

It seems that central banks see the benefit of digital currencies, but at the same time feel the threat of cryptocurrency, while central governments seem to have difficulty understanding the effect that cryptocurrencies might have on national economies. That is why we see hesitancy in terms of allowing crypto assets as payment tool or investment instrument. China, for example, imposed a full ban on cryptocurrencies (as it rolled out its own digital yuan or e-CNY), while El Salvador adopted the Bitcoin as a legal tender and acknowledged it as a legitimate payment system supported by Chivo (the country’s state-owned Bitcoin wallet). Meanwhile, in early October 2021 Federal Reserve (Fed) Chairman Jerome Powell confirmed during a hearing before the US House Financial Services Committee that he has no intention to ban or limit the use of cryptocurrency. However, he added that the Fed will soon issue research examining the costs and benefits of a central bank digital currency (or CBDC). This push for CBDC can be regarded a response to crypto (and to digital technology).

One can wonder whether the enormous quantitative easing programs that we have seen over the past 15 years or so around the world, and the near-zero interest rates environment (in some countries even negative rates) are actually clear signs that the existing monetary system is approaching the end of its ability. Without such huge money creation by central banks, nation’s economic growth simply ceases, or major economies enter depression. We have seen debt crises being solved by creating new (and more) debt, while massive money creation not only leads to a much higher cost of living (which may not be accurately reflected in inflation numbers) but also leads to huge misallocation of money.

It seems to have become a vicious circle: money printing, higher cost of living, and more debt, and then a new cycle is added. It is a system that makes more and more people and businesses dependent on financial support from central governments (and the COVID-19 crisis certainly gave a big boost to this process). Investors seem to realize the finiteness of this system, hence move to ‘all that the government cannot print’ such as property, shares, gold but also cryptocurrencies.

Read the full article in the October 2021 edition of our monthly report. This report can be ordered by sending an email to info@indonesia-investments.com or a message to +62.882.9875.1125 (including WhatsApp).

Price of this (electronic) article on cryptocurrency in Indonesia: 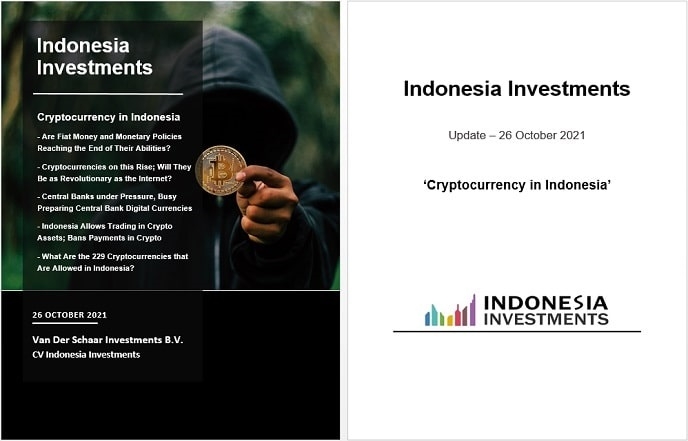