In recent months most attention went to the merger of Indonesian ‘superapp’ Gojek and e-commerce giant Tokopedia – including their plans to conduct an initial public offering (IPO) on the Indonesia Stock Exchange (IDX). But we should not forget that another Indonesian e-commerce giant (and tech startup unicorn), called Bukalapak, is scheduled to list on the IDX on 6 August 2021.

Bukalapak is a popular e-commerce platform (online marketplace) in Indonesia that facilitates sales between (mostly) the nation’s micro, small and medium enterprises (MSMEs) and consumers. This platform was founded by Achmad Zaky, Fajrin Rasyid and Nugroho Herucahyono in 2010. Within one decade it has evolved into a business empire and network that involves some 105 million registered users, 13.5 million MSMEs (including 6.9 million partners), and over 300 local distributors.

According to Bukalapak’s prospectus, the company will sell 25.76 billion shares to the public priced in the range of IDR 750 to IDR 850, each, in this IPO. This would raise a total of between IDR 19.3 trillion (or approx. USD $1.3 billion) and IDR 21.9 trillion (approx. USD $1.5 billion). The shares that are offered to the public equal 25.0 percent of the company’s enlarged capital. Local, regional and foreign investors, especially those focused on investment in (digital) technology, are all very welcome to invest in this platform.

Order our July 2021 report to read the full article. This report can be ordered by sending an email to info@indonesia-investments.com or a message to +62.882.9875.1125 (including WhatsApp). 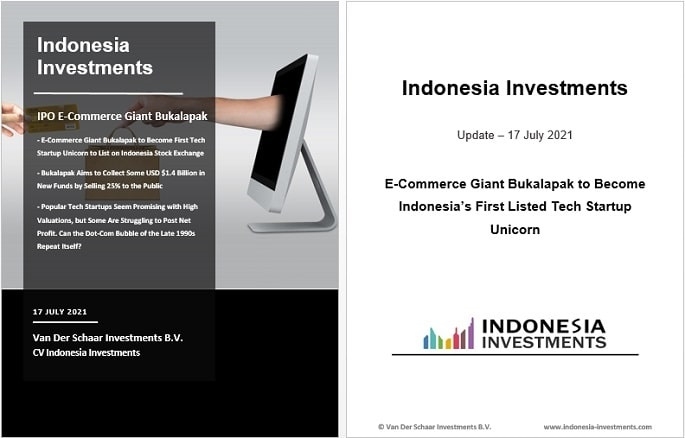