The 5.01 percent (y/y) growth figure in Q2-2017 is the same growth pace that was recorded in the preceding quarter and may also be an indicator that full-year growth has stagnated. When we take a look at table 1 below we see that each time there is an acceleration in GDP growth from the first to the second quarter, full-year economic growth will accelerate from the (full-year) result in the preceding year. However, when we see a falling growth rate from the first to the second quarter, then full-year GDP growth tends to fall compared to full-year growth in the preceding year. If this trend - that occurred between 2009 and 2016 - continues, then it would mean that Indonesia's economic growth will stagnate at 5.0 percent (y/y) this year.

What is also worrying is that economic growth in Q2-2017 is lower compared to the 5.19 percent (y/y) GDP growth recorded in the same quarter in 2016. This shows that economic activity has lost some steam in Q2-2016. On a quarterly, non-seasonally adjusted basis, Indonesia's GDP expanded by 4.07 percent in April-June 2017.

Growth in Indonesia's household spending, which accounts for about 55-60 percent of total GDP, was recorded at 4.95 percent (y/y), nearly flat from first quarter growth, and below the targeted 5 percent growth line. Recently, Indonesian households have been saving rather than spending (evidenced by rapidly rising third-party funds in the banking sector up to June 2017). As such, retail sales have been bleak so far this year in Indonesia.

Exports also failed to support accelerating economic growth. Export growth slowed to a pace of 3.4 percent. Weak trade data were attributed to a slowdown in domestic goods production and supply of imported goods. Meanwhile, growth in fixed capital formation, on the other hand, picked up to a pace of 5.35 percent due to rising investment.

The bleak GDP growth data did not impact significantly on the performance of Indonesia's benchmark Jakarta Composite Index on Monday (07/08). The rupiah exchange rate also remained stable. In the second trading session of the day, however, Indonesian stocks declined steadily. 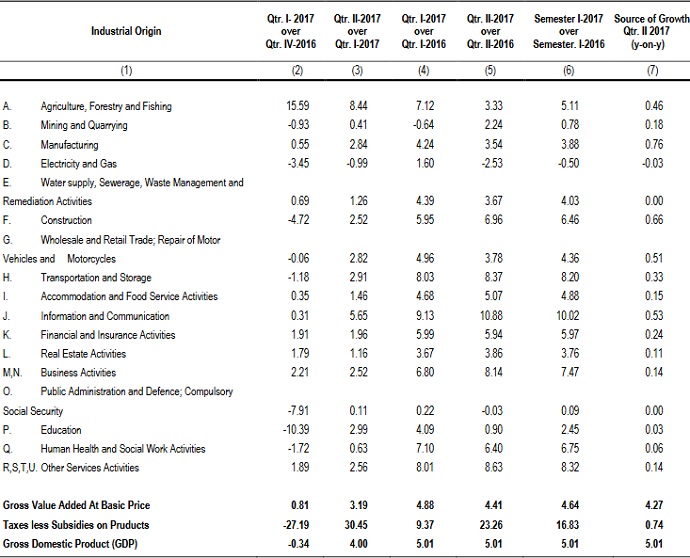