Although several quick counts of today's legislative election in Indonesia still continue, the big picture is clear. The current opposition party PDI-P will win Indonesia's 2014 parliamentary election, followed by Golkar and Gerindra. This is no surprise as most surveys that were released ahead of the election indicated that these three political parties would be the major contenders. As a whole, the election went relatively smoothly, with only a few minor incidents. The official result will be announced on 9 May 2014.

Turnout was perhaps slightly higher than initially expected at around 73 percent (the Indonesian electorate consists of roughly 190 million people out of a total population of 250 million). However, it is estimated that seven to eight percent of the people who came to cast their votes - either intentionally or unintentionally - invalidated their ballots. The remainder (27 percent of the electorate) abstained from voting. It is assumed that a significant portion of these people deliberately stayed away from voting as they feel alienated by politics.

Based on the preliminary quick counts, the PDI-P will win the legislative election with about 19 percent of the votes, followed by Golkar (around 14 to 15 percent) and Gerindra (around 12 percent). However, it is quite likely that the leadership of the PDI-P as well as the party's presidential candidate Joko Widodo (better known as Jokowi) are slightly disappointed with this preliminary result. As Jokowi, the Governor of Jakarta, is highly popular among the Indonesian people, the PDI-P might have quietly hoped to win 25 percent of the popular vote, enabling the party to nominate a presidential candidate for the July's presidential election without needing to form a coalition with another party. However, the so-called 'Jokowi effect' was not visible in today's election.

As usual in Indonesian parliamentary elections, the secular parties are far more popular than the Islamic ones. This trend continued in today's election as the top four parties are all labeled 'secular', meaning that they support religious pluralism and tolerance as well as democratic values, instead of aiming for a larger role of Islam in politics and society.

It is also interesting to note that incumbent president Susilo Bambang Yudhoyono's Partai Demokrat (PD) performed better than most analysts had expected. Based on the preliminary quick counts, the party is hovering around the 10 percent mark. In several recent surveys, it performed worse. In the 2009 election, the PD was the big winner, securing 20.8 percent of the popular vote. However, in the past three years, several scandals within the party's ranks made voters turn their backs to the PD.

Gerindra, the political party of Prabowo Subianto (who harbors presidential aspirations of his own), also did well and can now officially be labeled a new power within Indonesian politics. In the 2009 election, it secured 4.5 percent but is expected to have grown to 12 percent in today's election.

With no dominant winner in today's election, the next couple of months will be very interesting as Indonesia's political parties and leaders need to bargain and negotiate about presidential and vice-presidential candidates for the next election (which will be held on 9 July 2014). 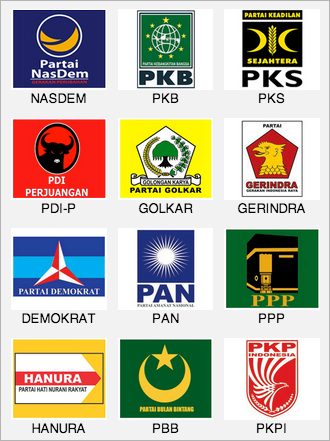