In late-January 2016 President Joko Widodo, often referred to as Jokowi, said the Indonesian government will undertake efforts to make family planning affordable and accessible across the archipelago. Through the country's National Population and Family Planning Board it will inject funds to enhance education, awareness and services regarding birth control. This is regarded a strategic investment that aims to address the major challenges posed by a rapidly growing population. A too rapidly rising population puts strain on housing, water, education and employment in Southeast Asia's largest economy. Jokowi uttered these words when opening the International Conference on Family Planning in Bali on 25 January 2016.

Indonesia is the fourth-largest nation on earth in terms of population size. Currently, the population is estimated to number 255 million, up 50 million compared to the start of the century. Based on projections from the United Nations (UN) Indonesia's population will grow to 290 million in the next 30 years. A characteristic of Indonesia - and which is in stark contrast to the populations of Japan, China and Europe - is that it has a young population with around half of the population below the age of 30 years. In theory it means that Indonesia has a demographic bonus due to the large portion of Indonesians in the working age. However, if these people (human resources) cannot be equipped with the right skills as well as education and fail to find a job due to limited employment opportunities, then this demographic bonus can turn into a demographic burden.

In recent years both the World Bank and the Organization for Economic Co-operation and Development (OECD) have expressed their concern about the high incidence of youth unemployment in Indonesia. With approximately 20 percent of Indonesia's young men and one third of the young women being unemployed nor go to school, unemployment among the country’s youth aged 15 to 24 is at an unusually high level, far above the country's national average as freshly graduated students from universities, vocational schools and secondary schools have difficulty finding their place in the workforce. A lower birth rate would increase the working-age population and leads to more-sustainable development.

During the Suharto era a successful family planning program was developed with the (locally famous) slogan "dua anak cukup" ("two children is enough"). This slogan successfully changed people's mindsets from the earlier notion of "banyak anak, banyak rejeki" ("many children brings prosperity"). Suharto's family planning program managed to halve Indonesia's fertility rate from 5.6 children per woman in the early 1970s to an average of 2.6 children per woman by 2002. Suharto's authoritarian New Order regime ended in 1998 but its family program was continued by his successors, although the success of this program started to wane.

Experts claim that starting from the early 2000s Indonesia’s family-planning program stagnated, reflected by fewer campaigns, few accurate information, and few promotion. This development was caused by a lack of commitment and lack of funds from local governments. Still, when looking at data from the World Bank, Indonesia's population growth continued to decline in the 2000s. According to a 2015 population survey, Indonesia's national fertility rate has fallen to 2.3 children per woman in 2015. The Indonesian government now targets to push this figure lower to 2.1 children per woman by 2025. 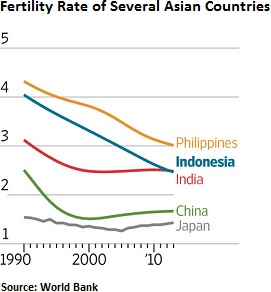 Indonesian President Joko Widodo is eager to raise efforts to enhance the success of the country's family planning program. Last month Widodo launched a village family-planning project in West Java, backed by local village chiefs. This program includes free family planning services for couples who fall under the government's universal health-coverage program (which was launched in 2014), improving clinics and human resources, and encouraging the use of contraceptives. Widodo emphasized that all other local governments in Indonesia need to make this program a priority. However, in Muslim-majority Indonesia these programs - which also aim to reduce Indonesia's high-maternal mortality rate - sometimes meet resistance. Teaching about family planning (especially when teaching to unmarried people)  and the use of condoms (and other contraception) are still major taboos in various regions. Usually there is also a poor participation of men in these family planning programs. Even though condoms are widely available (for free), research shows that they are reluctant to use this contraceptive method.