In the latest edition of its flagship publication, the World Economic Outlook (WEO), the International Monetary Fund (IMF) says it is concerned that sluggish global economic growth will persist in the foreseeable future particularly on the back of slowing growth in emerging markets (which account for the lion's share of global growth). The IMF's forecast for global growth in 2015 and 2016 was both cut by 0.2 percentage point to 3.1 percent (y/y) and 3.6 percent (y/y), respectively, from the July WEO Update. In 2014, the world economy grew 3.4 percent (y/y).

The IMF stated that prospects for economic growth remain uneven across the globe. While growth in advanced economies is expected to pick up modestly, economic activity in emerging markets and developing economies is expected to slow for the fifth consecutive year on the back of falling commodity prices (particularly oil-exporting markets are hit), declining capital inflows, depreciating emerging market currencies, and increasing financial market volatility. The last three factors are mainly caused by the Federal Reserve's looming monetary tightening (higher US interest rates). This triggers capital outflows from emerging markets and increases US-dollar denominated debt in these markets.

Although tentative, developed markets are estimated to expand slightly stronger than before due to an expected modest recovery in the Eurozone and some growth in Japan. However, it will not be enough to counterbalance the slowing growth that is forecast in emerging markets. Emerging markets and developing economies are projected to expand 4.0 percent (y/y) in 2015 (down from the 4.2 percent y/y estimate in July's WEO Update) and 4.5 percent (y/y) in 2016 (down from the earlier 4.7 percent y/y estimate). The sharpest downgrades made by the IMF involved Brazil, Nigeria, South Africa and Russia. The IMF also warned that a higher-than-expected slowdown of China would exacerbate the situation for emerging markets. China's economy is currently undergoing a transformation from investment and industrial export-driven to consumption-driven. 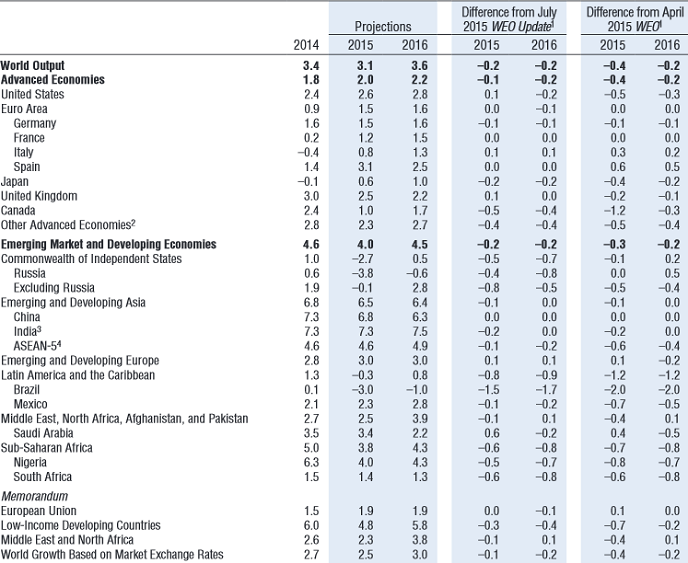 Maurice Obstfeld, Chief Economist at the IMF, explained that a key problem in the current world economy is slowing productivity growth that emerged after the great recession in the late 2000s. Due to sluggish growth, investments (and wage growth) lag behind leading to sluggish aggregate demand. The IMF advises that central banks' stimulus measures in advanced economies (Eurozone and Japan) remain intact (especially in case commodity prices continue to decline and inflation comes under further pressure), while it advises developing markets to brace for the Fed Fund Rate hike.