Bank Indonesia felt it is necessary to offer such incentive as it also decided to raise its benchmark interest rate at the June policy meeting (29/06). At that occasion the BI seven-day reserve repo rate was raised by 50 basis points to 5.25 percent. Moreover, a few weeks earlier there had already been two rate hikes. Thus, in total, Indonesia's benchmark interest rate rose from 4.25 percent in mid-May 2018 to 5.25 percent currently. These steps were needed to defend the rupiah amid heavy (mostly external) pressures. However, it also means that borrowing costs will rise in Southeast Asia's largest economy. Easier down payment regulations in the mortgage (KPR) sector may be able to boost demand for mortgages, thus safeguard healthy credit growth.

In the first quarter of 2018 KPR growth stood at 11.4 percent year-on-year (y/y) with the gross non-performing loan (NPL) rate at 2.6 percent. After several years of very modest KPR growth (due to Indonesia's higher benchmark interest rate in the 2013-2015 period, touching a high of 7.75 percent) KPR disbursement finally touched double-digits figures again in 2017 when it reached IDR 392.91 trillion (approx. USD $28 billion) in 2017, up 11.1 percent from IDR 353.65 trillion in the preceding year.

The continuation of this good KPR growth pace is now in jeopardy due to recent interest rate hikes. Therefore, Bank Indonesia took the following decisions at the latest policy meeting with regard to the LTV and FTV ratios:

(ii) relaxing the number of credit or financing facilities available through the pre-order mechanism; and

(iii) amending the stages and limits applicable to liquidate loans/financing.

(i) For example, currently, a first-time house buyer (if the size of the fully built house is over 70 square meters) has to pay a down payment of 15 percent of the price before being granted a mortgage. However, after the relaxation kicks in on 1 August 2018, this buyer will have to pay a down payment that is based on the bank's risk management. In theory the down payment can be zero in the above-mentioned case. This scenario will apply to all first-time buyers of property (houses/apartments), provided the property has already been built. 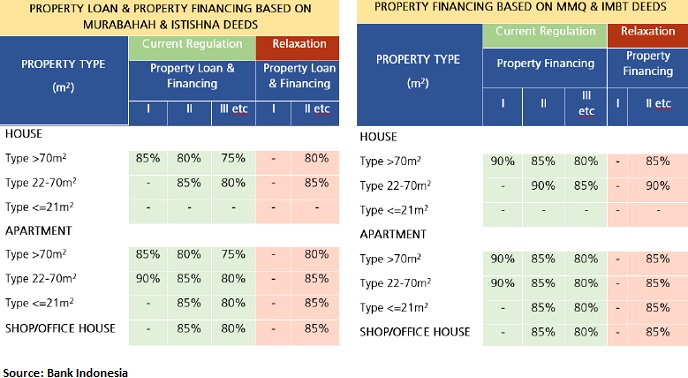 (ii) Secondly, after the relaxation has become effective a consumer can take up to five separate mortgage facilities. This is particularly attractive for those who want to invest in property (for example property that is yet to be built or is in the early stages of construction).

(iii) Thirdly, starting from 1 August 2018 there will be easier down payment obligations in relation to the stage of development of the property involved. For example, currently a consumer needs to pay a 60 percent down payment if he/she purchases a unit in an apartment complex project of which only the footing has been realized. The down payment in this situation will ease to 50 percent after 1 August 2018. 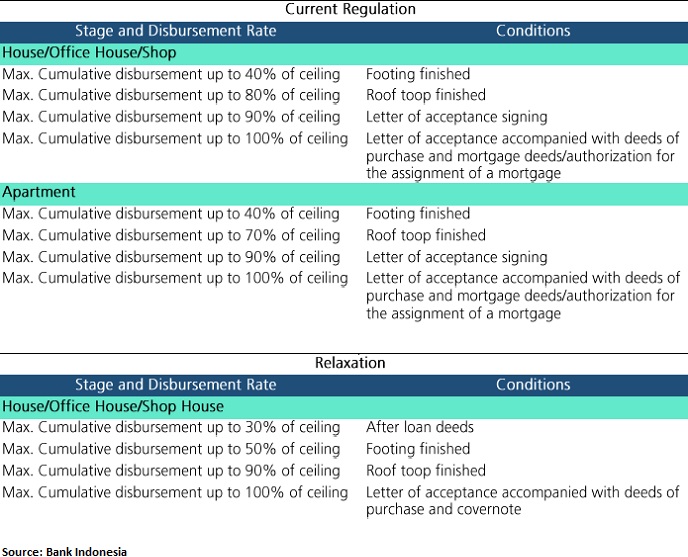 To avoid a drop in the level of financial stability Bank Indonesia only allows those banks to disburse mortgages under the new scheme that have a net NPL ratio of less than five percent toward total outstanding credit, as well as a NPL ratio (net) of less than five percent in the bank's property segment. In Indonesia the biggest mortgage lenders are Bank Tabungan Negara (BTN) and Bank Central Asia (BCA).