A massive earthquake off the west coast of the Indonesian island of Sumatra occurred on Wednesday evening (02/03) in the Indian Ocean. The latest news reports claim the earthquake had a 7.8 magnitude. Its epicenter was around 800 kilometers southwest of Padang, the capital city of West Sumatra. Indonesian authorities quickly issued a tsunami alert. Reportedly, it was a shallow quake, about 10 kilometers deep (shallow earthquakes are more likely to cause damage than deep ones).

The tsunami alert was issued for the provinces West Sumatra, North Sumatra, Aceh, Bengkulu and Lampung. Australia also issued a tsunami warning for Cocos Island and Christmas Island. About one hour after the earthquake authorities lifted the tsunami alert.

Heronimus Guru, Deputy Head of Operations at Indonesia's National Search and Rescue Agency, was quoted saying "there are some casualties". However, he declined to give more details. Later it was reported that the agency withdrew this statement, meaning that there are no confirmed deaths (yet).

Initially the US Geological Survey said the earthquake had a magnitude of 8.2 (Richter magnitude scale). This was later adjusted three times, to 8.1, 7.9 and then to 7.8. 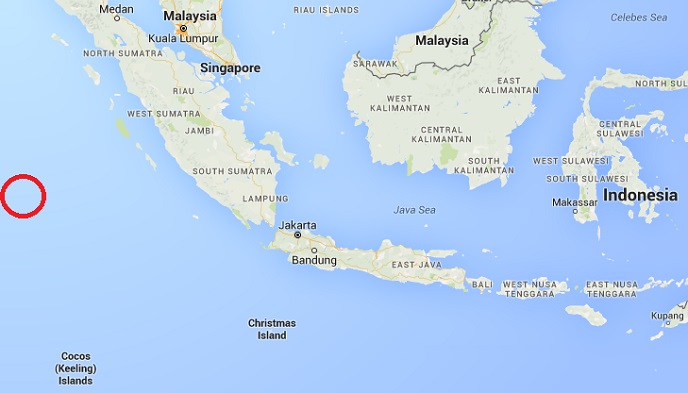 Located on the Pacific Ring of Fire (an area with a lot of tectonic activity), Indonesia has to cope with the constant risk of earthquakes and tsunamis. A submarine earthquake or volcanic eruption in the ocean can cause a tsunami water wave which can have devastating effects on the people and infrastructure near the sea. In 2004 a large part of the world was rocked by a massive 9.1 magnitude earthquake in the Indian Ocean (only 160 kilometers off the western coast of Aceh) and which caused a devastating tsunami, killing over 167,000 people in Indonesia (mainly Aceh) alone. Although a massive tsunami such as the 2004 tsunami is rare, the Sumatra region is often startled by offshore earthquakes that can potentially trigger a tsunami. With the 2004 tsunami still fresh in mind, the level of fear is high.

Earlier on the day, a 5.2 magnitude earthquake caused panic in Malang (East Java). However, there have not been any reports of casualties or damages.

In connection with this article I find it worth mentioning that the early-warning buoys which were installed for tsunami alerts were not working:

PADANG/JAKARTA, Indonesia, March 3 (Reuters) - All 22 of the early-warning buoys Indonesia deployed after the 2004 tsunami disaster were inoperable when a massive undersea earthquake struck off the coast on Wednesday, a National Disaster Mitigation Agency official said. [...]