Indonesia improved in the consumer confidence index that is compiled and released by market research agency Nielsen. With 122 points Indonesia was the third-most confident nation in the world (after India and the Philippines) in the 3rd quarter of 2016. Compared to one year ago, Indonesia's score improved six points. Indonesia's consumer confidence has improved each quarter so far in 2016 amid accelerating economic growth, controlled inflation at around 3 percent (y/y), and a stable - or actually stronger - rupiah exchange rate.

Agus Nurudin, Managing Director of Nielsen Indonesia, commented on the performance stating that Indonesia's consumer confidence was on the decline in 2015 but has made a strong recovery in 2016 touching 122 points in the third quarter of 2016. He added that a reading in the range of 120 - 124 is a normal reading for Southeast Asia's largest economy. Last year Indonesia's consumer confidence fell due to persistent economic turmoil (the domestic and global economic slowdown, low commodity prices, uncertainty about US monetary policy and non-optimal government spending in Indonesia).

Nurudin further informed that Indonesian consumers' confidence has been improving on the back of the government's economic policy packages as well as on the positive results of the tax amnesty program. However, the Nielsen index also indicates some concern, particularly about rising terrorist threats and political stability in Indonesia. Concern about terrorism also rose in other Asia Pacific countries, Europe and the USA, indicating it is a global trend. These concerns have grown after the Orlando shooting when - on 12 June 2016 - 29-year-old security guard Omar Mateen killed 49 people and wounded 53 others and the Bastille Day terror attack when on 14 July 2016 a truck rammed into a crowd celebrating in the French Riviera city of Nice, killing 86 people and injuring 434 others. 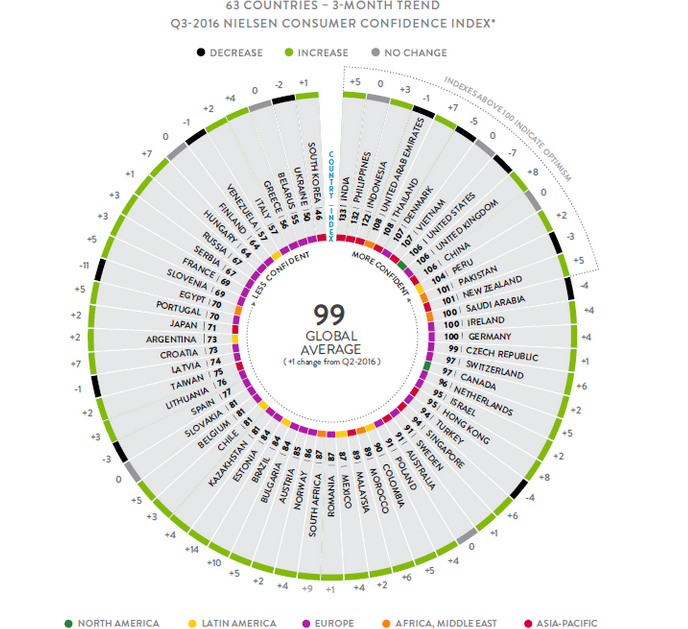 With a score of 122 points in the index Indonesia remains among the most confident countries and such high consumer confidence should be a reason for foreign and domestic investors to invest in Indonesia. With a population numbering 255 million people and rising per capita GDP this market is a lucrative one.

The Nielsen survey was conducted between 10 Augustus and 2 September 2016, involving more than 30,000 (online) respondents in 63 countries around the globe.