Indonesia's crude oil production (oil lifting) in full-year 2016 is expected to reach 819,000 barrels of oil per day (bpd), slightly below the target that is set in the Revised 2016 State Budget (820,000 bpd). Amien Sunaryadi, Head of the Special Task Force for Upstream Oil and Gas Business Activities (SKKMigas), said oil production realization in Indonesia so far this year stands at 834,000 bpd. However, due to seasonal factors output is set to fall in September. Moreover, amid low oil prices Indonesia somewhat discourages oil exploration and production.

Sunaryadi added that among the Indonesian oil and gas contractors (KKKS) that experience the largest drop in oil production Pertamina EP is the most-affected one. Pertamina EP, the unit of state-owned energy company Pertamina that is engaged in the management of upstream oil and gas production, will see a sharp decline in output as it reduced its drilling activities with the aim to curtail cost recovery expenses. Through the cost recovery scheme the Indonesian government reimburses oil companies for exploration and production costs. However, recently a budgetary commission cut the budget for recovery costs from USD $11.9 billion to USD $8 billion.

In current times of low crude oil prices, Indonesian authorities agree that it is not the right time to try to boost oil production as it will not contribute significantly to state revenue.

However, last week Indonesian President Joko Widodo ordered an intensification of offshore oil exploration in the gas-rich waters around the Natuna Islands in the South China Sea (off the northwest coast of Borneo island). Widodo made this statement after Chinese fishing boats were caught fishing illegally in the waters. China, on the other hand, claims that these waters are part of their traditional fishing zone (China's nine-dash line that nearly covers the entire South China Sea). Although it led to a series of face-offs between the Indonesian navy and Chinese fishing boats in recent month, these incidents do not seem to have troubled Indonesia-China's diplomatic relations so far.

However, last week Indonesian parliament approved a 10 percent hike in defense spending, including upgrades to military facilities on and near the Natuna Islands, while Widodo held a cabinet meeting aboard a warship in the waters around Natuna. This is seen as a strong message that Indonesia will stand tall to defend its territory in the area.

Read more: Overview of the Oil Industry in Indonesia

Meanwhile, production at the Mahakam oil and gas block (located offshore in East Kalimantan) is also expected to decline in the period ahead due to matters related to the change of the block's operators. After existing contracts of current operators - French oil giant Total SA and Japan-based oil firm Inpex Corp (each holding a 50 percent stake) - are set to expire on 31 December 2017, Indonesia's Pertamina and local governments will become the new lead operators, while Total and Inpex see their stake decline to 15 percent, each.

Pertamina is now waiting for approval from Total and Inpex to start investing in the Mahakam block in 2017 in order to prevent a decline in output at the block prior to the take-over at the start of 2018. It is estimated that the Mahakam block requires some USD $2.5 billion worth of investment each year in order to optimize production rates. 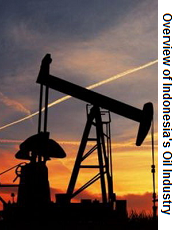