BPS Chief Suryamin informed reporters that inflation in July 2016 was primarily caused by higher prices of staple food items and higher transportation costs (especially land and air transportation) due to a large increase in travelers amid the Idul Fitri celebrations.

Previously, analysts expected to see monthly inflation between 0.75 - 1.00 percent (m/m) in July as the prolonged rainy season (brought about by the La Nina weather phenomenon) disrupts the supply of several agricultural commodities in Indonesia (for example onions and chilies). The effects of La Nina are estimate to intensify in the months ahead.

Markit Economist Pollyanna de Lima stated that the manufacturing industry of Indonesia is back in reverse gear as operating conditions plunged at the highest pace in 2016 so far. The decline in new orders caused manufacturers to curb production, employment, purchasing and stock levels. However, De Lima also detects a positive matter: given controlled inflation Bank Indonesia has room for more interest rate cuts this year. 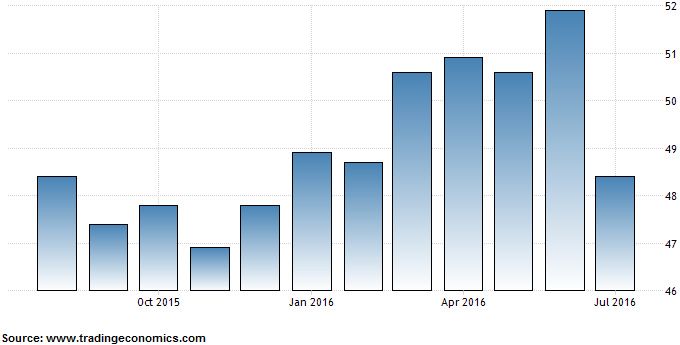