Indonesia's Investment Coordinating Board (BKPM) uses a IDR 13,400 per US dollar exchange rate (as was set in the 2018 State Budget), slightly weaker than the IDR 13,300 per US dollar rate that was used in the BKPM's investment data last year.

The biggest foreign investor in Indonesia was Singapore. Around USD $2.6 billion worth of FDI in Indonesia originated from this small city state in the first quarter of 2018. As is widely known, many Singaporean companies that invest in Indonesia have their parent companies in China or India. According to BKPM Head Thomas Lembong, investment from India - through Singaporean units - has risen significantly in Indonesia in Q1-2018.

Investment Realization Q1-2018 Based on Country of Origin: 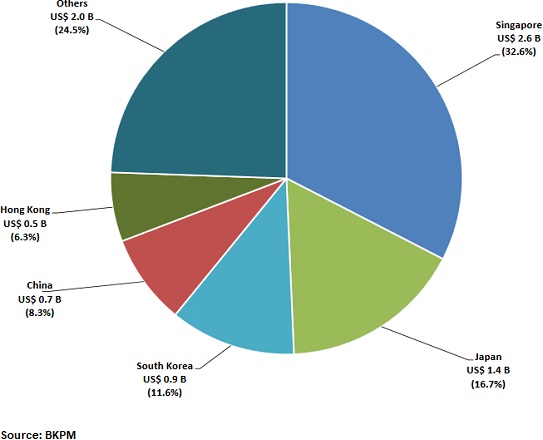 Most popular investment destinations of FDI were the housing, industrial estate and office building sector of Indonesia (with USD $1.88 billion worth of investment), and secondly the metal, machinery and electronic industry (USD $1.45 billion). Meanwhile, most direct investment went into the construction sector (IDR 13.0 trillion), food crops and plantations (IDR 10.4 trillion), and the transportation, warehouse and telecommunication sector (IDR 10.3 trillion).

Investment Realization in Q1-2018, Based on Sector: 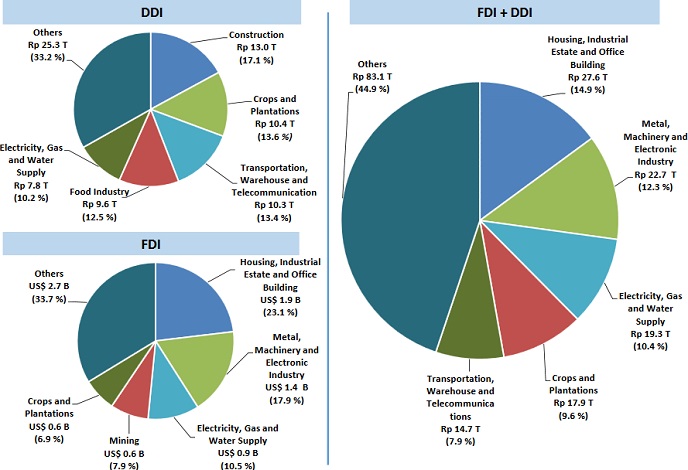 In terms of geography, inequality persists: while the regions outside the island of Java attracted IDR 73.5 trillion worth of direct investment in Q1-2018, Java island managed to welcome IDR 111.8 trillion in investment (particularly in West Java and the special territory of Jakarta). Considering Java is the most populous island within Indonesia it makes sense that investors, especially those who seek to sell their products to the domestic population, want to be close to their market.

Meanwhile, infrastructure development is relatively well-developed on Java (compared to the Outer islands). But, problematically, inequality in investment undermines the government's eagerness to close the gap between the Outer islands and Java. In fact, compared to Q1-2017 the investment gap widened in the first quarter of 2018 as direct investment in Java grew markedly, while investment outside Java contracted.

Investment in Java and Outside Java Comparison:

According to BKPM data, total direct investment in Indonesia in Q1-2018 opened up 201,239 new jobs for the local population.