For sure Indonesia's financial system will be affected by the Federal Reserve's decision to implement another interest rate hike, and especially emerging market currencies - including the rupiah - are vulnerable to further monetary tightening in the world's top economy. Most analysts now believe a Fed Funds Rate (FFR) hike could occur in July 2016. In previous rounds of US monetary tightening (QE tapering and the December 2015 FFR hike) we witnessed large capital outflows from Indonesia. What will be the impact of another US interest rate hike on Indonesia?

One thing that we can learn from previous rounds of monetary tightening in the USA - i.e. the winding down of the US quantitative easing program in late 2013 and the Federal Reserve's interest rate hike in December 2015 - is that capital outflows from Indonesia are particularly severe in the period leading up to the official decision of the Fed to implement a tighter monetary policy stance when - amid a high degree of uncertainty in global markets - investors become nervous, or even anxiously longing for clarity from the Fed. However, once the decision has been made public, there occurs a rapid recovery.

For example, when in late May 2013 former Fed Chairman Ben Bernanke started to hint at the winding down of the US QE program, it led to six months of uncertainty and speculation on international markets before the Fed finally provided clarity by announcing to taper its asset purchases in December 2015. However, during these six months of uncertainty and speculation Indonesia's benchmark Jakarta Composite Index fell from a high of 5,155.09 points on 20 May 2013 to a low of 4,174.83 on 9 December 2013, losing nearly one-fifth of its value. After the Fed's taper decision was made in December 2013, however, the Jakarta Composite Index rapidly rebounded and would hit a new record high some three months later.

A similar phenomenon was seen leading up to the US interest rate hike in December 2015 (the first FFR hike in nearly a decade). In the months ahead of this decision emerging markets fell prone to capital outflows. However, besides concern about further US monetary tightening, capital outflows from emerging markets were exacerbated by severe worries about China's 'hard landing'. However, after the Federal Reserve confirmed in December 2015 that the FFR would be raised it soon led to capital inflows into Indonesia's stock market as investors were pleased by the more certain economic context, while Indonesian stocks had become 'cheap' after the decline.

However, over the past couple of weeks speculation has been heightening again about another FFR hike and therefore we expect to see another round of capital outflows from Indonesia's stock market ahead of the official Fed decision (possibly in July).

The Indonesian rupiah, however, is a different story as there is a clear long-term depreciating trend against the US dollar ever since Bernanke hinted at QE tapering in May 2013. There are two brief periods characterized by marked rupiah appreciation (i.e. February 2014 and October 2015). However, such temporary rupiah strengthening was related to domestic factors (Joko Widodo joining the presidential race in early 2014 and Indonesia's improving macroeconomic context in late 2015), not so much the result of the rupiah's response to changing monetary policy of the Federal Reserve.

After the Fed decided to raise its FFR in mid-December 2015 there emerged high depreciating pressures on the rupiah for a couple of days. Soon, however, the currency started to appreciate and stabilize at around IDR 13,500 per US dollar. This was a much better response to US monetary tightening compared to the sharp rupiah depreciation that occurred after Bernanke hinted at QE tapering in May 2013. This is most likely related to the fact that Indonesia's financial system is in a better condition with inflation having eased below five percent (y/y) from nearly double-digit figures in 2013-2014. Meanwhile, Indonesia's current account deficit - which has been a major concern of foreign investors - improved as well. 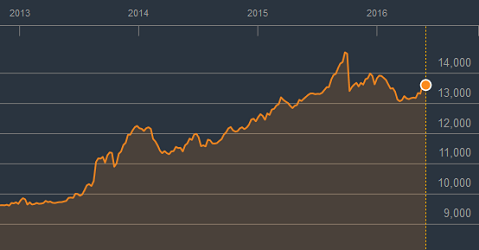 The current account balance is the broadest measure of a country’s international trade. When a country - such as Indonesia - is plagued by a current account deficit it implies that the country is a net borrower from the rest of the world and thus needs capital or financial inflows from abroad to finance this deficit. However, the dependence of the country to plug the deficit by foreign inflows is what makes investors nervous and therefore countries that have a (wide) current account deficit are highly vulnerable to capital outflows in times of global economic shocks (such as a change to US monetary policy).

Beautiful example currency risk:
an American who has invested since 2013 in Rupiah investment must create an overall efficiency of at least 40% over three recent years to have no loss - currency risk hedging is an (expensive) option ..