On Thursday (08/04/2020) Indonesia Investments released the March 2020 edition of its monthly update. In this edition, titled 'Coronavirus Panic Peaks Worldwide', we obviously focus on the impact of the novel coronavirus (COVID-19) outbreak on the Indonesian economy and Indonesian society.

In the three main articles we discuss various subjects such as (1) the impact of the COVID-19 outbreak on the Indonesian economy, (2) what explains the relatively low number of confirmed COVID-19 infections and fatalities in Indonesia (so far), and (3) the policy strategies that have been taken by the Indonesian government and central bank (Bank Indonesia).

In the remainder of the March '20 report we discuss how the COVID-19 crisis impacts on Indonesia's macroeconomic indicators, such as inflation, manufacturing activity, trade, government debt, and the rupiah. While this impact was relatively mild in February 2020, we can now confirm that the impact of the virus crisis on the Indonesian economy (or more precise the impact of the policy measures that have been taken by authorities) has become big in March 2020. Hence, a deep recession seems unavoidable for Indonesia in (at least) the first half of the year.

To purchase the report, please send an email to info@indonesia-investments.com or a WA text message to +62(0)8788.410.6944 for further information.

Take a Glance Inside the March 2020 Report: 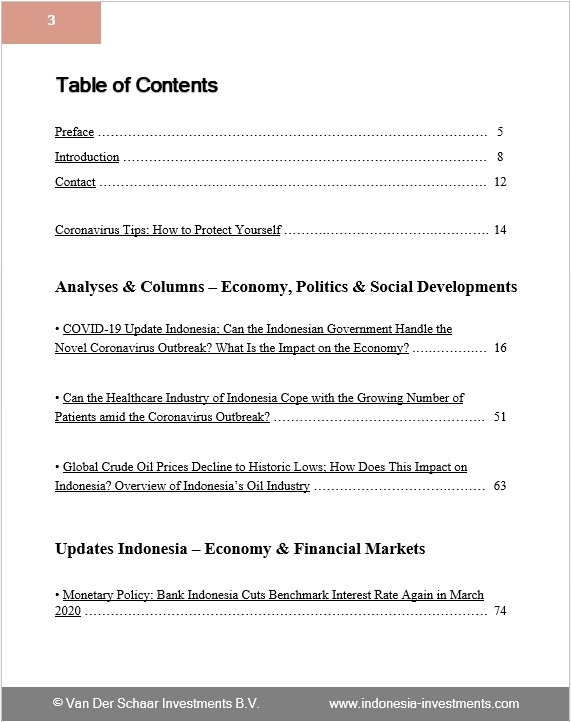 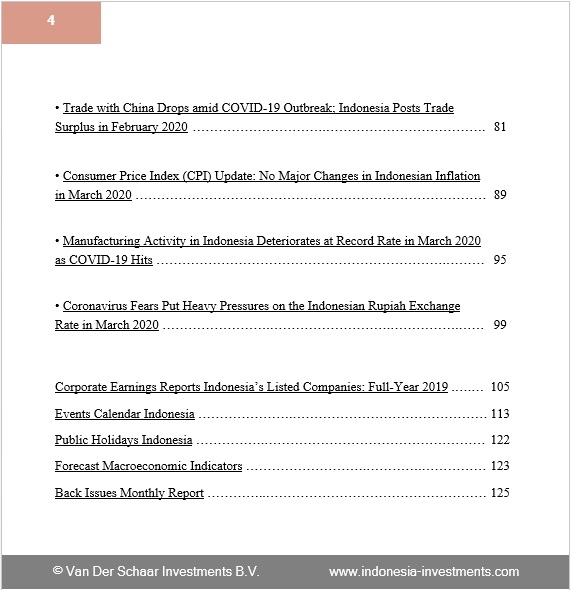 Introduction to the March 2020 Edition

March 2020 was a memorable – even historic – month. Only on very rare occasions had we seen such a complete loss of confidence in financial markets across the globe (namely ‘Black Monday’ in 1987 and the ‘Great Crash’ in 1929). The reason behind this new crash is obvious: the novel coronavirus (COVID-19).

At the time of writing this introduction, the total number of confirmed COVID-19 cases (around the world) had just passed the one million mark, while the number of deaths had reached more than 50,000. Moreover, these figures are expected to grow significantly in the weeks, possibly even months, ahead. It is clear that the world is dealing with a serious threat.

In mid-March 2020 the World Health Organization (WHO) already labelled the COVID-19 outbreak a ‘global pandemic’. Indeed, no country seems safe from the virus, and thus all governments around the globe (and other key institutions, such as central banks) need to come up with effective measures and solutions to limit the impact of the virus on society and on the economy. This is no easy undertaking considering we are in uncharted waters.

What is remarkable about this new virus is that most healthy people who are infected will only show mild symptoms (or may not even notice at all that they are infected), while it can be fatal for those who have weakened immune systems (or who have other underlying health issues). This means that most fatalities involve the elderly. And there are a number of terrifying stories in global media about how various elderly had to die alone as family or other close ones were not allowed to be near them due to quarantine measures.

The COVID-19 outbreak has triggered a true health crisis. In those cities or regions where there are many COVID-19 infections, demand for intensive care beds, medical equipment (such as ventilators) and other medical services is outpacing supplies. Reportedly, in some Italian and Spanish hospitals it now feels like a war zone.

The economic consequences are bound to be enormous, with the world heading for a deep recession in the first half of 2020. Most governments have imposed various restrictions on the movement of people (urging people to stay at home, or – if possible – work from home), have banned the organization of events, and have ordered the temporary closure of certain businesses (such as cafés and bars). It has resulted in a huge decline in economic activity around the world. Meanwhile, trade flows are disrupted too, especially due to the lockdown in China, which is a key source of raw materials for industries across the globe, thereby disrupting global manufacturing activity.

The huge drop in economic activity makes victims. When sales decline, companies start to struggle financially, encountering difficulty to pay employees’ wages, to repay debt, or rent office space. This subsequently leads to rising unemployment, various bankruptcies, and bad loans for banks. And in emerging markets, many micro and small entrepreneurs are in jeopardy of falling into full poverty once their incomes vanish; a social crisis looms.

To avoid this chain of events, governments and central banks are forced to come up with unprecedented stimulus packages. And despite these packages, many analysts are already talking about how the world-shattering COVID-19 outbreak will lead to permanent shifts in political and economic power, in ways that will become apparent only later (similar to the impact of the fall of the Berlin Wall at the start of the 1990s, or, the Asian Financial Crisis in the late 1990s).

As mentioned in the first paragraph, rarely do we see such as huge crash in global markets as we did in March 2020. Across the globe benchmark stock indexes plunged between 25 - 40 percent (compared to their positions at the start of the year). Volatility was uncanny. Losses were particularly massive in the first three weeks of March 2020, when it started to become very clear that the virus was spreading – and making victims – in the West.

It became a common sight to see benchmark indexes (such as the US Dow Jones Industrial Average) plunging, or rebounding, by more than five percent in one day. On some days, these indexes even dropped (or rebounded) over 10 percent.

Despite strong rebounds on some days, stocks were in deep red territory, overall, during the first three weeks of March 2020. It showed that market participants had completely lost their confidence, and went for safe haven assets (especially when coronavirus fears became burdened by an unfolding crude oil price war between Russia and Saudi Arabia which caused global oil prices to touch historic lows).

Initially, it seemed that monetary stimulus programs announced by central banks around the world failed to ease investors’ minds as stocks remained in deep red territory. But in the last week of March 2020 this trend reversed; stock markets started to recover (albeit high volatility persisted). It is assumed that the combined total of stimulus packages that were announced by governments and central banks in the first three weeks of March 2020 finally succeeded in convincing market participants that they will go all out to limit the negative impact of the COVID-19 crisis on the economy and on society.

In the remainder of this March 2020 report we focus on how the COVID-19 crisis impacts on the economy and society of Indonesia.