Two key points in the survey were that output fell marginally, but new orders rose again. Meanwhile, business confidence was at its weakest in 57 months

Conditions in Indonesia's manufacturing economy improved in September for the second consecutive month, mainly due to another increase in new orders on the back of strong underlying demand. In line with this trend, export orders also rose in September, although the pace of growth slowed from August's 57-month high.

However, output declined marginally in the same month. The decrease in output was associated with subdued demand conditions and, in some cases, a limited supply of raw materials.

In response to lower output requirements, local manufacturing companies reduced their staffing levels (payroll numbers), albeit fractionally, at the end of Q3-2017. Although falling for the 12th month in a row, the rate of job shedding was fractional and the joint-weakest in this sequence.

On the price front, firms faced sharp cost pressures, but were unable to fully pass these on to consumers due to competitive pressures. Quantities of purchases increased amid reports of efforts to replenish stocks in line with forecasts of further improvements in demand. That said, pre-production inventories declined further. Conversely, stocks of finished goods rose during the month. However, the pace of growth was modest. Meanwhile, there were signs of pressures on supply chains as delivery times lengthened. Longer lead times stemmed from a lack of raw materials among vendors, according to anecdotal evidence.

Cost burdens rose further as the rate of inflation was sharp overall. Currency weakness was reportedly the main reason leading to higher input costs (the rupiah being under pressure - like other emerging market currencies - amid renewed US dollar strength). Amid reports of the passing on of higher cost burdens to clients, companies raised their output charges for the 13th successive month in September. That said, the rate of inflation slowed to the weakest since May and was modest.

The degree of confidence towards the 12-month outlook for output eased to the weakest level since December 2012, but firms remained optimistic overall. Survey respondents indicated that business expansions and promotional activities would lead to further improvements in demand. 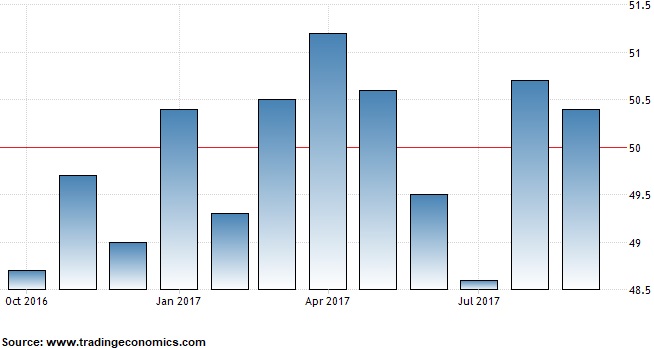 Aashna Dodhia, Economist at IHS Markit said: "Manufacturing conditions across Indonesia sustained its tepid recovery from July's deterioration (strongest in 12 months) at the end of the third quarter. PMI data suggested that expansions in new work emanated from both the domestic and foreign markets. On the downside, output fell fractionally due to raw material shortages. Meanwhile, concerns regarding future business prospects echoed a note of caution, with confidence dipping to the lowest level since December 2012."

"Firms felt some respite around inflationary pressures, as input cost inflation slowed to the weakest since December 2016, alleviating some doubts that the recent interest rate cut would intensify inflation. For 2017 as whole, IHS Markit revised down their CPI forecast to +4.0 percent," Dodhia added.