The rise in new orders in September 2016 was supported by growing demand in the domestic and foreign markets. New export orders showed its strongest growth in almost four years, this was particularly attributed to strengthening demand from Europe. This implies that, overall, operating conditions in Indonesia's manufacturing industry improved for the second straight month. However, the pace of growth was small and softer compared to growth recorded in the preceding month. Markit also noted that input and output prices both rose.

Input prices rose as importers had to pay a higher price for a wide range of raw materials. Unfavorable exchange rates resulted in these increases in average cost burdens. Meanwhile, Indonesia's inflation rate was marked, but eased since August. Having fallen in the previous month, output prices rose modestly in September.

As a result of greater output, both employment and buying levels increased in Indonesia's manufacturing sector in September. However, the pace of job creation was marginal (although effectively ending a two-month sequence of declining payroll numbers).

Pollyanna De Lima, Economist at IHS Markit, stated that Indonesia’s manufacturing sector continued to expand gradually in September, yet output growth lost some momentum. PMI data showed that total new orders rose for the second straight month, while export demand posted the strongest upturn in nearly four years. Quite likely, companies believe in the sustainability of demand growth, as purchasing activity improved and some job creation was reported. Besides, firms seem to be trying to preserve profit ability margins, with factory gate charges being raised in response to higher cost burdens. Yet, inflation rates were only mild in the context of historical data.

The overall situation in manufacturing looks encouraging and although the observed growth in the sector remains on a relatively weak footing, the latest decision by Bank Indonesia to slash rates will likely boost the economy as we move into the coming quarter. 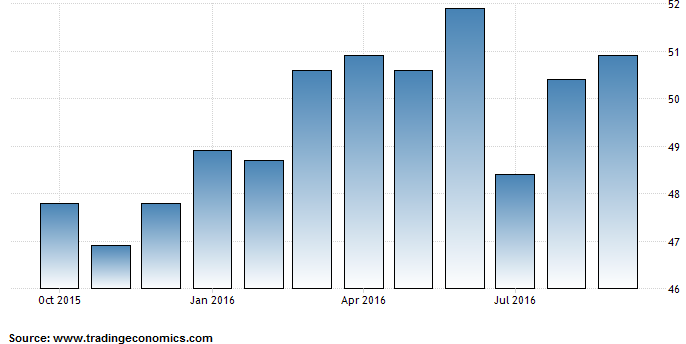