Manufacturing activity in Indonesia continued to contract in the last month of 2016. The Nikkei Indonesia Manufacturing Purchasing Managers' Index (PMI) slid to a reading of 49.0 in December 2016, from 49.7 in the preceding month (a reading below 50.0 signals contraction, while a reading above 50.0 signals expansion). It was the third consecutive month of contraction in the manufacturing sector of Southeast Asia's largest economy. The survey also showed that Indonesia's manufacturing exports showed their steepest fall since October 2015.

Indonesia's manufacturing activity fell amid a steep decline in new orders from abroad. Declining orders are attributed to lower demand and weakening consumer purchasing power. December’s survey showed the steepest  monthly fall in new business from abroad since October 2015, with the rate of contraction much faster than for total new orders.

As a result of fewer demand and output, employment in Indonesia's manufacturing sector continued to decline. Employment has now declined in five of the past six months, with December’s decrease being the most marked since August 2015.

Pollyanna De Lima, Economist at IHS Markit, said "December 2015 PMI data suggest that the Indonesian manufacturing industry moved away from stabilization at the end of 2016, with further falls in inventories and employment indicating that companies remain on a cautious footing. A steep drop in new export orders contributed to a faster overall decline in new business, with the domestic market also a source of weakness. Subsequently, the sector’s labor market continued to suffer as job cuts have now been seen for three months in a row." 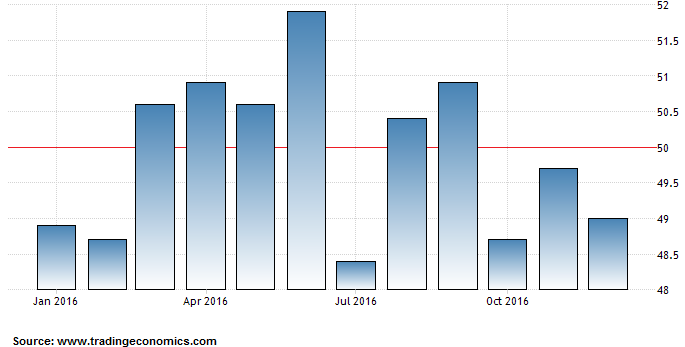