Again concerns about Indonesia's manufacturing sector flared up after it was reported this morning that the Nikkei Indonesia manufacturing purchasing managers' index (PMI) declined to a reading of 48.7 in October 2016 (dropping significantly from 50.9 in September). It was the first time since July 2016 that Indonesia's manufacturing PMI contracted (a reading below 50.0 signals contraction). Employment, new orders as well as output all contracted in October, while pre-production stocks rose (slightly).

Over the previous two months Indonesia's manufacturing activity expanded but conditions deteriorated sharply in October. Businesses cut output amid declining foreign and domestic new orders (the pace of reduction in new export orders was much softer than that of domestic orders). This decline was attributed to weak underlying demand and unfavorable weather conditions.

Pollyanna De Lima, Economist at IHS Markit, stated that "PMI data show that Indonesia’s manufacturing sector faced a host of setbacks in October. Having rebounded in August and stayed in growth territory in September, order books, production and buying levels all fell. Bleak demand was the culprit, with firms reporting weakness in both the domestic and external markets. In light of Bank Indonesia’s decision to ease monetary policy for a second straight month, manufacturing growth may be resumed as we are approaching the year-end.” 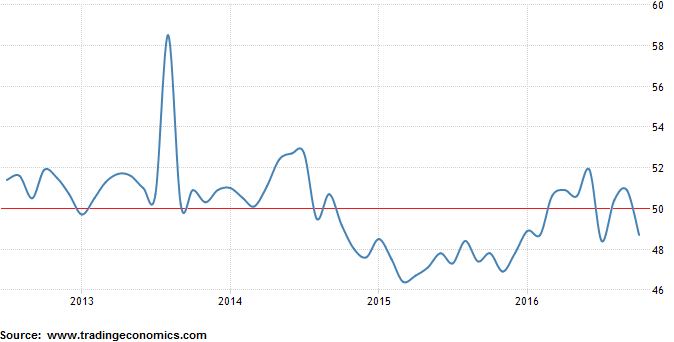