New order growth in January 2017 was particularly attributed to domestic demand. In fact, new export orders contracted for the fourth straight month. This could point at reduced competitiveness of Indonesian manufacturers and/or subdued demand from global clients.

Input costs for Indonesian manufacturers rose due to higher prices for petrol, paper, chemicals, textiles, metals and plastics. Although the official January inflation figure for Indonesia is to be released later this morning (01/02), Indonesian inflation is expected to have accelerated to a 11-month high. Some companies passed on part of the additional cost burden to clients.

Meanwhile, in line with technological developments, employment fell in Indonesian manufacturing companies in January 2017. The rate of contraction was slight but also the fastest in the current four-month sequence of job losses in Indonesia's manufacturing sector.

And yet, manufacturers remain optimistic. According to the survey, 82 percent of participants expect to see higher output in the year ahead. New product launches, business expansion plans and better marketing campaigns are among the reasons that boost optimism.

Pollyanna De Lima, Economist at IHS Markit, said the turn of the year saw an improvement in business conditions at Indonesian manufacturers as a return to growth of new work led companies to scale up production. PMI data showed that the upturn was domestically-driven as new export orders dipped again. Looking ahead De Lima said the trend for trade will remain challenging considering the high degree of ongoing uncertainty surrounding the global economy. On the other hand, however, Indonesia's central bank (Bank Indonesia) lowered interest rates over the past year and this is likely to boost consumer spending in Southeast Asia's largest economy. 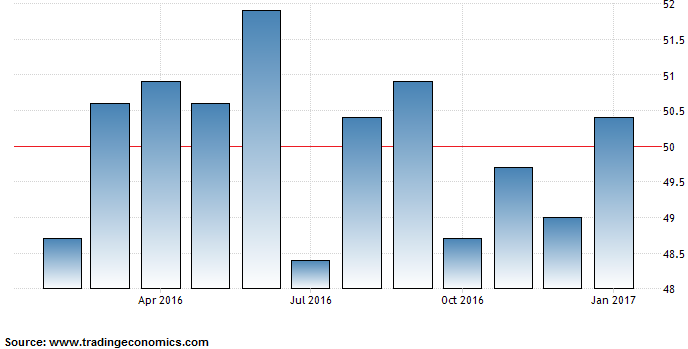