While the 2024 general elections of Indonesia (involving both the presidential and legislative elections) are scheduled to be held on 14 February 2024, we expect to see a growing focus on these approaching elections throughout 2023. The reason is that campaigning will kick off before the end of 2023 (namely on 28 November 2023).

The 2024 elections are very relevant because after a decade Southeast Asia’s largest economy will have a new person at the steering wheel (as incumbent President Joko Widodo will have completed his second and final presidential term next year). This raises the following question: will the country be guided into a different direction, or, will matters stay roughly the same?

It is a valid question for the business and (foreign) investor community. Incumbent President Widodo was certainly a change from Susilo Bambang Yudhoyono (SBY) as Widodo made strong efforts to impose structural reforms in a bid to attract direct investment (which is regarded a tool for social development as investment typically opens up employment opportunities).

For example, Widodo (supported by his coalition in the House of Representatives or DPR) pushed for infrastructure development, tried to cut Indonesians’ dependence on fuel subsidies, and imposed a new legal framework (Omnibus laws) to improve the business and investment environment. It all proved to be very complex matters (like turning a huge oil tanker around on the ocean) that are far from completed. But, at least, Widodo made the (first) real steps, paving the way for his successor(s) to continue this ambition.

As we wrote in an article in our October 2022 report, the 2024 presidential election is likely to become a race between Prabowo Subianto and Ganjar Pranowo. Recent surveys suggest that Subianto is particularly popular outside Java, while Pranowo is particularly popular on Java. If Pranowo would take over from Widodo, then few will change as Pranowo is a Widodo-like character (and member of the same party: PDI-P), seemingly sharing the same vision and mission. But the big question is whether PDI-P Chairwoman Megawati Sukarnoputri is willing to nominate Pranowo as she might prefer to nominate her daughter Puan Maharani (for personal reasons).

If Subianto takes over from Widodo in 2024, then there is the possibility of seeing some changes. For example, it might be that Subianto is less friendly toward foreign investment. In the previous presidential campaigns, Subianto (who was defeated by Widodo in both the 2014 and 2019 race) expressed criticism on Widodo’s red carpet for foreign investors.

Read the full article in our December 2022 report (an electronic report). This report can be ordered by sending an email to info@indonesia-investments.com or a message to +62.882.9875.1125 (including WhatsApp). 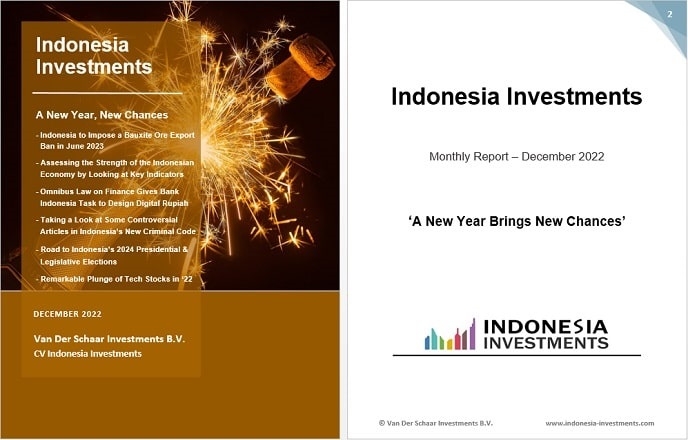