Over the past decade or so many analysts – including us – have pointed out that the structural deficit in Indonesia’s current account balance is a serious weakness.

In a nutshell, a current account is the widest measure of (both public and private) cross-border transactions (including trade, tourism, capital transfers, and foreign assets and liabilities) between a country and the rest of the world. Hence, when a country runs a current account deficit, it can be labeled a ‘net borrower from the world’.

This does not mean that running a current account deficit is necessarily negative. In fact, a deficit can be a sign of a healthy and booming economy. A very simple example being that massive growth of imports of capital goods (namely physical assets used in the production process to manufacture products and services that consumers will later buy) into a country – in the context of direct investment – may temporarily put pressures on the current account balance. But considering these goods will be used to generate new revenue streams (creating new jobs and perhaps encouraging more exports in the future), it is positive for the national economy. And therefore, in order to determine whether a current account deficit or surplus is positive or negative for a country, we need to take a closer look at the exact context of this balance and the country.

Typically, though, portfolio investors become quite nervous when a country (where they have invested in shares and/or bonds) runs a structural current account deficit because it means this country is absorbing more than it is producing. This implies that the rest of the world is ‘lending’ its savings to it (in the form of debt to, or direct/ portfolio investment in the economy). And another possibility is that a country with a current account deficit is simply running down its foreign assets (such as its official foreign currency assets). Either way, the question arises whether it is a sustainable situation for the country in question.

And so, in times of global (political/economic) turmoil – when investors seek safety (safe haven assets such as gold or US dollars) – then it are usually shares and bonds in those economies that run a structural current account deficit that are ditched the first, particularly if it involves an emerging economy (as emerging economies are typically less stable – from an economic, financial, social, and political perspective – than advanced economies; which also explains why emerging market assets always need to offer higher yields in order to encourage appetite for some risk-taking).

With the above in mind, let’s take a look at Indonesia, especially now Indonesia’s central bank (Bank Indonesia) has just released the Q3-2021 current account data.

Size of this article: 20 pages

Price of this full (electronic) article: 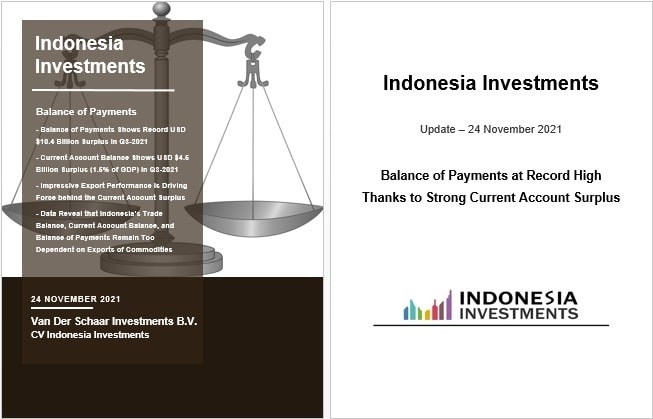