Those who have been following the international news should be aware that there are growing signs that the existing COVID-19 vaccines are not enough to combat the COVID-19 pandemic. In Singapore, vaccinated individuals now account for about 75 percent of the city state's COVID-19 infections.

Meanwhile, in Israel, which is a very interesting country to monitor since it was the first country to reach herd immunity levels, Pfizer and BioNTech’s COVID-19 vaccine is just 39 percent effective. And as Israeli hospitals reopen COVID-19 wards, a ‘third jab’ program is being rolled out.

Moreover, Chinese researchers concluded in late-July 2021 that antibodies triggered by Sinovac's COVID-19 vaccine (the most used vaccine in Indonesia) dropped below a key threshold starting from around six months after a second dose had been given (for most recipients).

The ‘positive’ news is, though, that those who have been vaccinated are less likely to fall seriously ill (and thus less likely to die). However, the question remains whether the vulnerable people (namely those who have weakened immune systems, either because of old age and/or underlying illnesses) may again be in jeopardy of falling seriously ill (thus requiring intense medical treatment) once (nearly) all antibodies have vanished after six to twelve months.

So, for now, we can conclude that existing COVID-19 vaccines only have a temporary positive effect on public health due to the constant mutating of the virus. With time, the efficacy of these vaccines simply wanes, unless a new shot (booster) is given.

So, one could argue that everyone simply needs to get a booster every six months or year to solve the problem. Well, unfortunately, it is not that easy as we see three big problems with such periodic COVID-19 boosters:

(1) It remains unknown whether these vaccines and booster shots can trigger health problems (especially those that only become visible on the long-term) because, from the start, appropriate testing has not been done (we would like to remind the reader that all these COVID-19 vaccines, some of which use the brand new mRNA technique that had never been approved by medical authorities prior to this COVID-19 crisis, were developed in record time, and so a significant part of the world population has in fact been participating in phase III or IV clinical trials over the past six months). So, before governments decide to give periodic boosters to the population, it needs to be completely clear whether (or not) there emerge (long term) side effects when these vaccines are injected each (half) year, especially the mRNA vaccines.

(2) Developing a vaccine against a virus such as COVID-19 seems a case of ‘lagging behind the events’. What we mean by that is that a vaccine can only be developed for an existing virus variant because the genetic makeup of the particular variant needs to be understood before a matching solution can be found via a vaccine. The current problem is that, even in case the perfect vaccine is found for the Delta variant of the COVID-19 virus, this particular vaccine will be quickly out-of-date because the virus has mutated (which is partly the virus’ response to the vaccine). Once a new vaccine is developed to combat a new mutation, the virus simply mutates again, requiring the need for another vaccine (a pattern that will repeat indefinitely). This is very similar to the seasonal flu vaccine which also requires constant adjusting because of influenza mutations (thus vulnerable people are advised to take a new flu shot each new flu season). Therefore, due to constant mutating, the perfect vaccine can never be found. However, it does seem likely that one has built a stronger immune system to tackle a new COVID-19 variant if one has had an encounter with another COVID-19 variant before (either through natural transmission or a vaccine).

(3) While it is relatively easy for a city-state like Singapore, or, a small country like the Netherlands to give boosters to the majority of their populations every six or 12 months, this is simply impossible for a huge country like Indonesia (which is home to 270 million people). It would mean that – with the current approach – social and business restrictions need to be continued indefinitely, implying that economic and social development is derailed indefinitely (with pharmaceutical companies being the big winners as they can expect to see massive incoming waves of money, largely originating from people’s and businesses’ tax money). Meanwhile, also some careful research needs to be done on whether mass vaccination programs (using a variety of different vaccines, even within one region), amid a pandemic, actually encourage virus mutations. We are in an unprecedented situation, hence caution is required.

Probably somewhere in the third quarter of 2020 Indonesia Investments started to warn in our reports that governments’ sole focus on vaccines as the only solution to this crisis entailed a big risk, because if you don’t know whether a safe and effective vaccine can be developed (and from the start there was no reason to assume that a safe and effective COVID-19 vaccine could be developed), then it is irresponsible to gamble on this single solution. Now it has become increasingly evident that vaccines do not bring the solution (at least not in the foreseeable future), this tunnel vision needs to be lost by seeking other strategies. If not, even more valuable time is lost to combat the crisis. In particular Western governments and supranational institutions (such as the World Health Organization, WHO) seem to have great difficulty to lose this tunnel vision. And, something that is not helping is that many institutions in the traditional media merely support their governments’ or WHO’s narrative, instead of carrying out investigative journalism while showing a more critical attitude toward this narrative. All in all, it then becomes very difficult to exit the crisis. In fact, one could even argue that the world is in an intrinsically worse position now (July 2021) than it was a year ago. But, are there any other strategies to combat COVID-19?

The full article (which consists of 39 pages) is available in our July 2021 report. This report can be ordered by sending an email to info@indonesia-investments.com or a message to +62.882.9875.1125 (including WhatsApp).

This article (in PDF file) can also be purchased separately for Rp 40,000 only 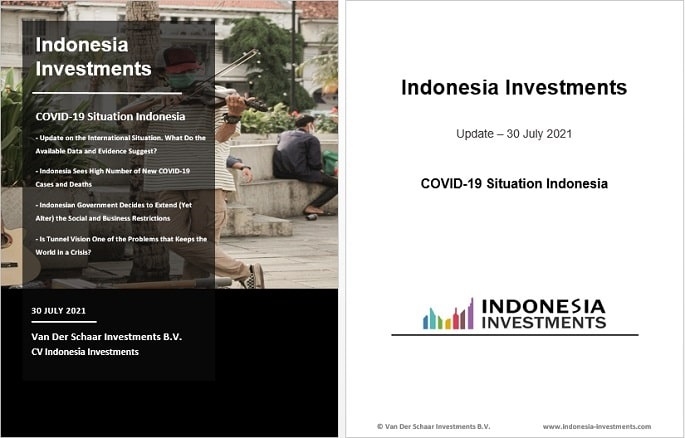