On Sunday morning (13/05) terrorists struck three churches in Surabaya (East Java) when Sunday morning services were about to start or were ongoing. By 14:00 pm local time on Monday police confirmed 15 deaths (including the six terrorists) and 45 injured people (who are being treated in local hospitals). However, over the past hours these numbers have been rising and therefore there is a chance they will rise further in the next couple of hours as developments proceed and more information becomes available.

Due to the terrorist attacks Indonesian President Joko Widodo changed his schedule this Sunday and departed to Surabaya where he has already visited the sites as well as injured people in the hospital. In a televised speech Widodo strongly condemned the attacks.

In the afternoon police said the terrorists who attacked the three churches are believed to be members of one family: a father, mother and four children. This family is allegedly affiliated with the Jamaah Anshar Daulah (JAD), an extremist group affiliated with the Islamic State (IS) network. The family was among IS-affiliated Indonesians deported by the Turkish government in 2017.

The father drove a car filled with explosives to the GPPS church, while his two sons (both teenagers) carried out a suicide attack on a motorcycle at Gereja Santa Maria Tak Bercela. The mother, together with her two daughters (aged 9 and 12), went to GKI Diponegoro by motorcycle to commit the act. 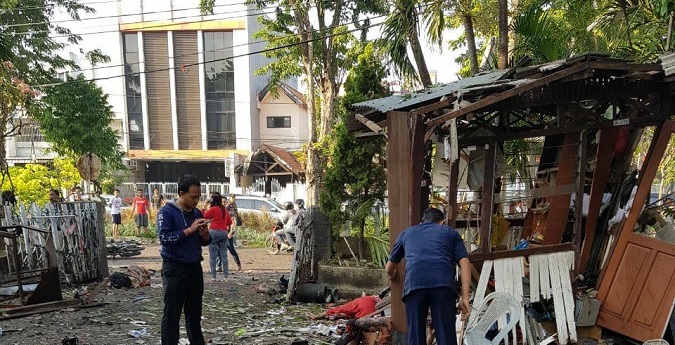 Explosion in Apartment in Sidoarjo

Meanwhile, on Sunday evening, several explosions were heard in Sidoarjo (close to Surabaya), possibly all occurring at the fifth floor of the Wonocolo low-cost apartments located behind the Taman Police station in Sidoarjo. Allegedly one bomb went off prematurely. It is assumed the bomb(s) were planned to be used to attack a local police station (police officers are among the favorite targets of terrorists in Indonesia). After a bomb disposal team arrived at the apartment, four or five more explosions were heard. Police say there is a connection between the Sidoarjo explosions and church bombings because similar types of explosives were used.

The Sidoarjo apartment blast also involves a six-member family (father-mother and four under-aged children). The mother and eldest son died due to the bomb. Meanwhile, the father was shot dead by police.

On Monday morning (14/05) a bomb went off at the entrance of Surabaya police headquarters (Mapolrestabes) around 08:50 am local time. Video images show two motorcycles approaching the entrance. When they are stopped by security officers an explosion happens. Police said this latest suicide bombing also involved one family (father, mother and three children). Ten people, involving four policemen and six civilians, were wounded in the attack. Meanwhile, four suicide bombers were killed (the eight-year old daughter of the terrorists survived the suicide bombing).

On Wednesday morning (16/05) five terrorists (using a four-wheeled vehicle) forced their way passed the gate into the area of the Riau police headquarters. One officer, who was hit by the vehicle, died while two others were injured. Four people then got out from the vehicle and started to attack police officers with samurai swords. They were all shot dead by police. Later police arrested the fifth person, who had fled the scene.

These events come several days after a deadly riot by terrorism detainees at a police prison near Jakarta, claiming the lives of five police officers and one convict as well as several injured people. The riot started when detainees managed to attack police officers in the prison and break through a gate to reach a weapon room. On early Thursday morning (10/05) all 155 inmates surrendered after a special police team started to storm the prison. Furthermore, two suspected terrorists were shot dead by police as they tried to approach the prison in an apparent attempt to help the convicted inmates. One policeman was stabbed to death.

On Monday (07/05) the Jakarta State Administrative Court rejected a petition by Hizbut Tahrir Indonesia (HTI) to overturn a ministerial decree disbanding this hardline Muslim organization. On 19 July 2017 the Indonesian government had officially disbanded HTI in response to allegations that the group seeks to establish a caliphate in Indonesia. This ban was based on a newly signed government regulation that gives the government the power to dismantle mass organizations that threaten national unity.

Read also: Overview and Analysis of Radical Islam in Indonesia