Rising domestic demand caused Indonesia's August manufacturing activity to grow at the fastest pace in more than two years. As a result local manufacturing companies added new people to their staff. The headline seasonally adjusted Nikkei Indonesia Manufacturing Purchasing Managers' Index (PMI) grew to 51.9 in August 2018 (up from 50.5 in the preceding month), further above the 50.0 level that separates expansion from contraction in terms of manufacturing activity.

Operating conditions in Indonesia's manufacturing sector strengthened at the joint-strongest rate since July 2014, driven by solid growth in total new orders from domestic clients. Responding to rising new business, Indonesian manufacturers raised output in August at the strongest rate since May (albeit still modest overall), while raising their staffing levels for the third consecutive month. The rate of jobs growth in Indonesia's manufacturing industry was the strongest in nearly 7.5 years.

Meanwhile, in line with rising domestic orders, purchasing activity in Indonesia's manufacturing sector grew for the seventh consecutive month in August. However, the rate of growth remained modest despite accelerating from the preceding month. Meanwhile, growth of pre-production inventories slowed at a fractional pace.

Amid reports of the limited availability of raw materials, lead times for inputs lengthened to the greatest extent since April. Still, the rate of deterioration in vendor performance remained modest.

Inflationary pressures intensified further in Indonesia during August, with the rate of input cost inflation accelerating to the sharpest in nearly three years. Panelists widely attributed rising input costs to rupiah weakness. At the end of August 2018 the rupiah in fact touched a two-decade low against the US dollar. Subsequently, Indonesian manufacturing companies raised their output charges at the quickest pace since October 2015. Positive for local manufacturers was that stronger domestic demand conditions enabled companies to pass on higher cost burdens to clients.

Sentiment towards the one-year outlook for production in Indonesia's manufacturing sector strengthened to a three-month high in August. That said, the latest reading remained much weaker than the historical average.

Aashna Dodhia, Economist at IHS Markit, said "August survey data signaled that the health of Indonesia's manufacturing sector improved to the greatest extent in over two years, driven by the strongest gain in new orders since July 2014 and a survey-record rise in employment levels. The PMI data suggested that the latest upturn was led by stronger domestic demand".

"However, other PMI indicators showed that the economy faces a number of challenges. Firstly, demand for Indonesian goods from international markets fell further during August. Secondly, input costs rose at the sharpest pace in nearly three years as the Indonesian rupiah remains under pressure due to US dollar strength. On the bright side, stronger demand conditions enabled firms to raise output charges to help alleviate pressures on margins", he added. 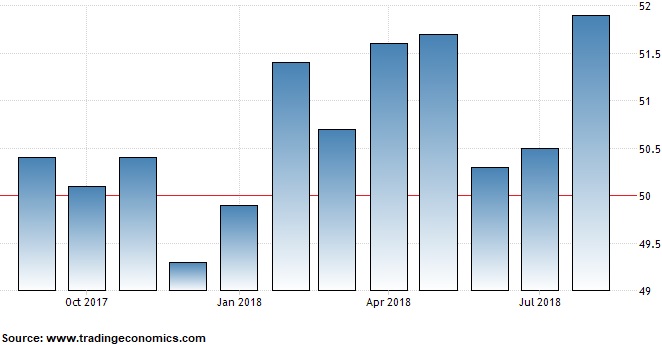